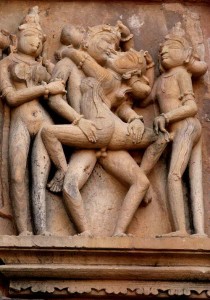 Khajuraho and Kamasutra fire the fancy of any foreign tourist to India.  Add Spirituality and the heady mix becomes a killer app for seekers of quick-fix salvation for paying a visit to India!  Biologically sex evolved as a reproductive mechanism to possibly capture the advantageous heritable genetic traits from a partner.  Only humans and a few animals like bonobos and dolphins indulge in recreational sex.  Sex is closely tied to sensory perceptions and lies within the realms of the mind. Salvation transcends both senses and mind. “Rajneesh, the ‘horse’s mouth’ concerning the topic of enlightenment for Westerners for many years,” regrets James Swartz, “wedded two largely incompatible concepts, sense enjoyment and enlightenment.” One may lose ‘self identity’ and get enwrapped in an inexplicable joy in either of them as Brihadaranyaka Upanishad says. But the bliss of enlightenment and the pleasure of sensual gratification are totally different. Our brains can show it all very clearly!

Human brain is a mass of interlinked neurons piled up in three layers. At the bottom is the most primitive brain common to all animals. 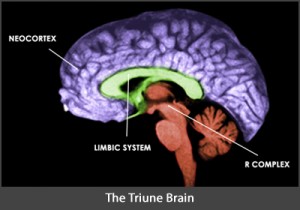 The outermost covering (called cortex) of the brain is divided into several lobes. The lobes have distinct cognitive functional areas; but no rigid walls separate them. The frontal lobe (behind the forehead) having the overseeing and decision making function is well developed in humans. The top brain (cerebrum) comes parted vertically into two hemispheres. The right hemisphere is concerned with ‘NOW’, i.e. the present moment. The left hemisphere thinks analytically and is also the seat of language. Constant intercommunication between both the hemispheres provides a meaning to what we perceive. Activities like sex or meditation involve many parts of the brain.  No unique God-spot or Sex-spot exists within the brain.

Extensive brain scan studies were carried out on practitioners of various types of meditation like Buddhist, Christian, Hindu and Sikh meditative practices. I am not, however, aware of any brain scan studies done on a Jivanmukta (an individual who is said to have achieved Nirvana or Non-Dualistic “Awakening”).

The parts of the brain that become active during meditation depend on the type of meditative practice of the seeker. In the monks who practiced focused meditation, “activity in the parietal lobe (which orients us in space) goes down. Activity in the frontal lobe involved in paying attention goes up.” Dr. A. Newberg opines that loss of orientation together with focused attention cause a feel of ‘oneness’ with the object of meditation. 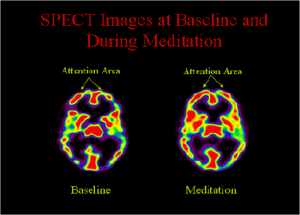 SPECT Image During Meditation (After A. Newberg, 2008)

Similar results were noticed in the case of Franciscan nuns too. Pentecostal nuns who do not focus on any particular object in their prayers showed lower activity in the forebrain. Brains of those practicing Transcendental Meditation (TM), essentially as a relaxation meditation, did not show much activity.  Carmelite nuns who achieved Mystical Union could not, however, summon their communion with God when they were within the scanner tube during the research studies. Dr. Beauregard, the investigator, could only scan a recollection of their profound divine experience. The results showed activity in those brain regions that are connected to learning, falling in love and social emotions.

Dr. R. Davidson mapped the activity in the brain of Buddhist monk Matthieu Ricard, who has over 30 years of experience in ‘compassion meditation.’  “The pictures showed

Meditation modulates Insula (After R. Davidson, 2003)excessive activity in the left prefrontal cortex (just inside the forehead). Generally people with happy temperaments exhibit a high activity in the left prefrontal cortex, an area associated with happiness, joy and enthusiasm.”  Scientists at Wisconsin reported that positive emotions such as loving-kindness and compassion could be learned the same way as playing a musical instrument.

excessive activity in the left prefrontal cortex (just inside the forehead). Generally people with happy temperaments exhibit a high activity in the left prefrontal cortex, an area associated with happiness, joy and enthusiasm.”  Scientists at Wisconsin reported that positive emotions such as loving-kindness and compassion could be learned the same way as playing a musical instrument. 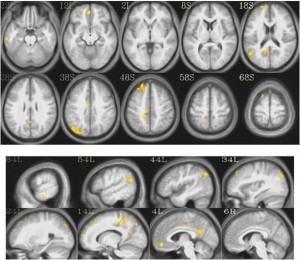 Many epileptic patients with seizures in the temporal lobes experience intense religious feelings and calmness. Taking a clue from this, Dr. Persinger developed a helmet that produced electrical activity in the temporal lobes. Some volunteers wearing it did experience ‘cosmic bliss’.  Swedish scientists could not replicate these results. There is a rare case of Dr. Jill B. Taylor, herself a brain scientist, who had a stroke in 1996 due to hemorrhage in the left hemisphere of her brain.  With only the right hemisphere functioning at the time of the stroke, she felt she lost her identity as a separate individual. She reported experiencing Non-Dualistic cosmic connection to infinite energy.

Admittedly a laboratory is profoundly an unsexy environment to study human sex, that too inside the claustrophobic confines of a scanner.  Thanks to the Dutch scientists   who could successfully pull off such an impossible study, valuable data could be gathered  on the activity of the brain during the peak sexual performance of the volunteers.

“Achieving orgasm involves more than heightened arousal. The brain’s pleasure centers generally lighted up brightly in the brain scans of both sexes,” reports Dr. Holstege. In the male volunteers “extraordinary activation of the brain’s reward circuitry during ejaculation was noticed” accompanied by high activity in the regions connected with memory. In contrast, “when a woman reached orgasm, much of her brain went silent” indicating relaxation and overcoming of inhibition. Brain regions related to bonding with the partner were also lighted up in the female. 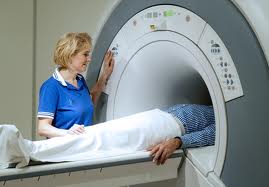 It is clear from these studies that brain records religious highs and sexual pleasures differently.  Does it mean that God-feeling in our head is nothing more than a few chemical signals and electrical pulses in our neurons? Can misfiring neurons create exalted religious feelings like in those of Moses, Muhammad and the Buddha? We do not know. Nevertheless, we may expect the lofty capstone of religious experience to leave its footprint in the brain.  This does not mean that knowing which part of our brain gets activated during Nirvana in any way lessens the reality or beatitude of Nirvana. Man set foot on the moon over forty years ago and found it to be no more than a pockmarked lifeless dusty place. Did it in any way lessen the poetic charisma or the romantic inspiration of the moon?

[Note: This article was originally published in late 2008 and is presented here for a wider circulation.

In the intervening three and half years since the publication of this article, a few research papers on the effect of mindfulness and vipassana meditation on brain and a couple of papers on sensual pleasure have appeared.  The substantive part of the research findings remain the same. A Buddhist Monk and also a Neuroscientist, Prof. Zoran Josipovic published a paper saying that the brain appears to be organised into two networks: the extrinsic network and the intrinsic, or default, network. “The extrinsic portion of the brain becomes active when individuals are focused on external tasks, like playing sports or pouring a cup of coffee. The default network churns when people reflect on matters that involve themselves and their emotions. Dr Josipovic believes the ability to churn both the internal and external networks in the brain concurrently (during meditation) may lead the monks to experience a harmonious feeling of oneness with their environment.”  He has an ongoing project with The Baumann Foundation on “The Influence of Nondual Awareness on the Functioning of Anti-correlated Intrinsic and Extrinsic Networks in the Brain.” The premise of the study is, as reported: Nondual awareness presents a unique opportunity to study the functioning of the intrinsic/extrinsic networks in the brain, as it is characterized by the cessation of habitual fragmenting of the field of experience into inside vs. outside, self-related vs. other-related processes. The work hopes to answer:  In what way can nondual awareness inform us about the functioning of anti-correlated networks in the brain? And  What can understanding of the neural correlates of nondual awareness tell us about its nature and its possible effects on people’s mental health?]

7 thoughts on “Pleasure of Sex vs. Bliss of Self in Brain Scans”