[The topic of Dreams is something I have not originally planned to include here in this series which was primarily designed to address the issue of Upanishadic support for considering deep sleep itself as Liberation (moksha).]

Please allow me here to take a short digression to discuss dreams because of a few questions raised by our esteemed readers. 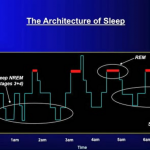 First of all, I would like to correct the misconception that some of us have that the moment we hit the pillow and get lost in sleep, we just flow through one continuous phase of dreaming, then deep sleep and, lo  behold, we get up refreshed in the morning. So, to this extent, the sequence of Awake state (A), Dream state (U), and  Deep sleep (M) corresponding to AUM as presented by Mandukya  Upanishad is awfully way out. ***  The Upanishad says that these three states arise in an everlasting turIya which is compared to the ‘silence’ at the end of AUM. ***  Several experimental studies carried out over a period of more than half a century demonstrate that the architecture of our sleep pattern is vastly different as experienced by us every night. A typical hypnogram (the nightly sleep cycle) we go through each night is shown in Fig. 1. (Please click on the figure for an enlarged view).

During our dreaming, for some unknown reason, our eye balls keep rapidly moving sideways. This is called “Rapid Eye Movement” (REM). (Some dreaming may happen, however, under conditions of Non-REM (NREM) too). Further, we find that our deep sleep has several stages in it, the deepest stage being the fourth one.

We usually go through 4 – 5 wake-sleep cycles each of about 90 minutes duration every night. It is our experience that the REM dream-phase increases and the deep sleep becomes shallower as the night progresses. Most often it is only the last dream before we get up that we tend to remember. As Prof. Walker puts it in a lighter vein, we suffer from “psychosis” in our sleep because  we become  ‘hypnotic’ (imagining unreal dream scenarios), ‘delusional’ (believing in the content of the dream while dreaming) and ‘amnesiac’ (mostly forgetting  what we dreamt).

If we neglect, for the present, the NREM dreams and the sub-stages in deep sleep, we can see from Figure 1 that our nightly song is not simple AUM or even AUM-AUM. The Neuroscientific findings show, it is more like AMU-MU-MU-AMU-MU-MU-A….

The ancient Indian philosophical texts discuss dreams extensively. There were some texts which believed in the content of the dreams as portenders of future and talked about the ways of controlling the dreams, thereby manipulating our future. They even invented a Goddess of dreams and a method to worship her! Yogavaasishta unequivocally pooh-poohs all such writings.

The  Advaitic scriptures like Yogavaasishta tend not to lay much distinction between the awake and dream states. Yogavaasishta even says at one place that there are only two states – the dreaming and deep sleep, implying that the wakeful world is no more than a continuation of the dream state.

In the 136th Canto of the Second part of the Sixth Chapter, Nirvana in Yogavaasishta, Rama poses a crucial question to Sage Vasishta regarding the non-difference between the wakeful and dream worlds.  An edited and abridged version of the dialogue is given below:

Sage Vasishta:  ” There are two types of births that you come across in the world.

One is through the Mentations of Brahman; the other is through illusion.

The firmly embedded series of fantasies from the past lives help in establishing an identity with the fundamental five proto-elements (tanmatras). If a creature is born as a result of such an identification, it is called as the birth through illusion.  Perceptual contact with the imagination has a strong role in this process.

The Supreme Brahman at a stage when It does not have any imagination of the world, in other words prior to the creation, goes through a changeless change (vivarta) to become the five elements by the strength of Its own thought.  This type of birth comprising the five elements is through the Mentation of Brahman.  This does not require a mother’s womb.

If a birth takes place because of some past imagination, it is a birth out of a womb, though you may not have clearly seen the womb.  From this angle, the birth in a dream or in the wakeful world has no difference between them.  Both are illusory and hence both are births from a womb.

You may talk of a lineage for a birth in the wakeful world.  If you regress in the series, you may go up to the four faced Brahma.  What lineage is present beyond?  Who is the mother for Brahma?  His first creation has to be purely mental but not dependent on sex.

In the Sarga 51 of the First Part of the Chapter Nirvana also, Sage Vasishta declared that “the world that we observe is totally a dream.” He tells Rama as follows:

Sage Vasishta: “The dreams you have in your sleep are a small part of your awake world.  Just to differentiate the two, the latter is called ‘the wakeful state.’  Such a label misleads us to assume that it is a true state.  To avoid this confusion, I call it as ‘a living dream’.   I named the smaller part of the dream state within it as ‘dead dream’.  It is a fitting name because dreams come during sleep which almost resembles death.  The entire world including the dead dream part is called ‘living dream’ because it is the dream of Hiranyagarbha, the first individual (jiva).  Thus, Rama, the world visible to you is within the ‘living dream’ of Hiranyagarbha.  What was seen earlier as well as what was not seen appear in the living dream.  Sruti declares:

“Whatever was seen or not seen before, heard or not heard before, experienced or not experienced before is seen in the living dream.

“Several things such as obtaining a never-before-seen divine body after losing the present body occur in dreams.  This happens because of the influence of past impressions.  The word ‘adRshTa’ (unseen) in the above mantra should be taken to mean things not seen in this birth because there is no thing that is not experienced at one time or the other during the infinite births and deaths.  If it was not experienced at all, there is no scope for it to be stored as an impression.  The other words (asRtam (unheard),  ananubhutam (unexperienced))  have also to be interpreted in the same way.”

In the later Sargas Sage Vasishta narrates several stories wherein the chief characters easily float between the imaginary dream worlds and the empirical wakeful world leaving a confused Rama express his doubt about such a possibility.

Rama:  “How can the conjectural beings obtain real existence?”

Sage Vasishta:  “Your question betrays your wrong assumption.  You seem to think that men in the wakeful state are real and those in the imaginary and dream states are unreal. It is not so.

“Whatever does not exist at the beginning and at the end, that is to say what lacked existence in the past and will not exist in the future, is non-existent even in the present time. This adage is an incontrovertible axiom and should never be forgotten.  As per this rule, none of the people, whether of wakeful state or imaginary state or of dream state have any sort of reality.  They appear to have existence simply because of the Beingness of the substratum.  Each individual sees a particular world to be true as a function of his residual impressions.”

In the Fourth Chapter on Sustenance, we come across the story of the imagined lives of Sukra, the son of Sage Brighu. One of those imagined lives attain so much of a solidity and physicality that it required two people to carry the dead body and cremate it. Such was said to be the power of imagination!

[ ***  Note: The original sentence in place of the two in reddish color read as follows:

“So, to this extent, the sequence of Awake state (A), Dream state (U), and  Deep sleep (M) followed by a period of silence corresponding to AUM + half mAtra as presented by Mandukya  Upanishad is awfully way out.”

I recast it after Dennis has been kind to point out that it was not correctly formulated.]