Meaning:  When all the desires that dwell in his heart (mind) are gone, then he, having been mortal, becomes immortal, and attains brahman in this very body. (Translation: Swami Madhavananada.]

Shankara clarifies at this mantra that “It is virtually implied that desires concerning things other than the Self fall under the category of ignorance, and are but forms of death. Therefore, on the cessation of death, the man of realization becomes immortal. And attains brahman, the identity with brahman, i.e. liberation, living in this very body. Hence liberation does not require such things as going to some other place.” (Translation: Swami Madhavananada.]

Further, Shankara observes at 4.4.6, brihadAraNaka that “Therefore, as we have also said, the cessation of ignorance alone is commonly called liberation, like the disappearance of the snake, for instance, from the rope when the erroneous notion about its existence has been dispelled.”

Thus, the Upanishads clearly tell us that the ending of all desires, which arise out of our ignorance of not knowing who we truly are, is liberation. Some authors call it as vAsanAkShaya (eradication of all the past impressions).

From the above description, we may develop a schematic representation for the structure of an individual (jIva) as shown in Figure 1 below: 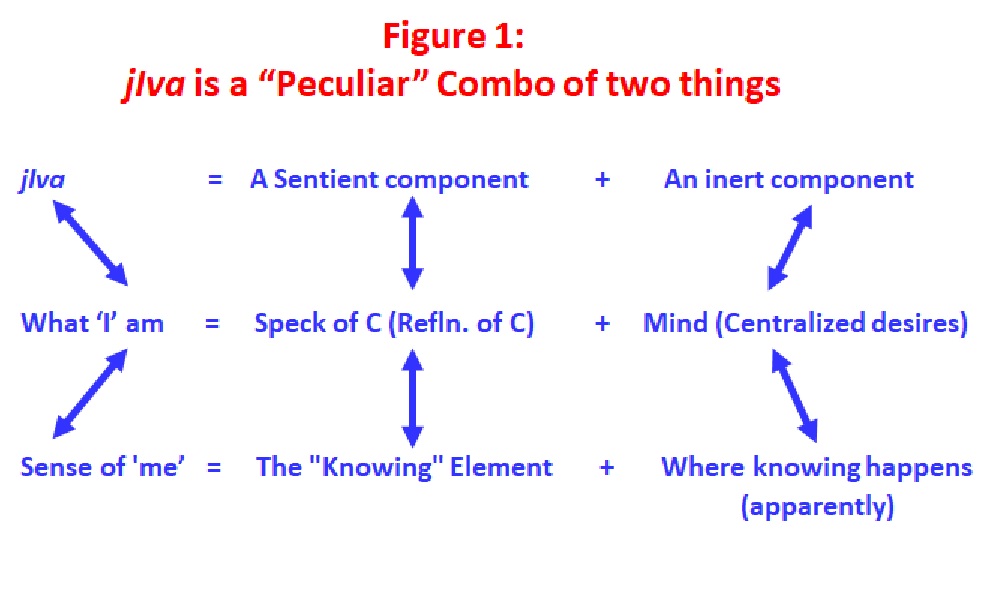 [Explanations for the Figure 1:

jIva is a “Peculiar” Combination of two ‘things.’ The word “Peculiar” refers to the ‘Mutual Superimposition of Qualities’ between the Self and the not-Self.

The double arrows show the equivalence of the terms. For example, jIva  =  what we normally think as ‘What ‘I’ am’  =  the sense of ‘me.’

Individual or jIva has an in-built sense of ‘Doership + Ownership.’

Speck or Reflection of Consciousness (depending on the ‘Model’ adopted – whether the ‘Theory of Delimitation’ or the Theory of Reflection to explain the genesis of an individual).

Mind is Centralization of desire at a spatio-temporal point, as explained by Swami Krishnananda.

The Fig. 1 also helps us to appreciate better the Advaita concept of liberation.

The speck of Consciousness (or reflected image of It – depending on which ‘model’ is used) is the only truly ‘Sentient’ and ‘Knowing’ substance (vastu). The other component on the right is insentient and hence, incapable of ‘knowing.’ The Infinite Consciousness in Its imagination (or forgetfulness or due to some unknown transient perturbation) temporarily ‘ignores’ Its Infiniteness and ‘thinks’ It is finitized as we can understand from 1.4.10 brihadAraNyaka and Gaudapada’s kArikA at 2.12, GK.

From the above, we can conclude that the ending of the ‘feeling or thought that ‘I am limited or finite’ in the speck of Consciousness is what is termed as ‘liberation.’ Therefore, liberation is also a notional or explanatory concept as far as the Infinite Consciousness is concerned. The other insentient component (mind), anyway, does not get ‘liberated’ because it is inert and not a real entity.

In other words, ‘liberation’ is notionally the breaking up of the ‘intermixed’ individual (jIva) into the two components which constitute it. The Sentient component “realizes” Its own original Infinite nature (which has never actually got finitized) after being reminded of Its True original nature from the teaching by the Guru and the scripture.

[Note: Shankara explains the role played by the scripture as follows:

Meaning: The scriptures aim at the removal of the differences fancied through ignorance. Not that the scriptures seek to establish brahman as entity referable objectively by the word “this.”

Opponent: What do they do then?

Vedantin: By presenting brahman as not as object on account of Its being the inmost Self (of the knower), they remove the differences of the ‘known,’ the ‘knower,’ and the ‘knowledge’ that are fancied through ignorance. (Translation: Swami Gambhirananda).

Meaning: It is an accepted principle that the scriptures are only informative, not creative. (Translation: Swami Madhavananda).]

The insentient component dissolves into the five fundamental elements like darkness disappearing into illumination on the turning of a light (vide  8.12.3, chAndogya and also different mantras in brihadAraNyaka Upanishad).

Armed with the above understanding, it is easy to attempt an answer to the third and main Question.

What Happens after Self-realization?

Shankara himself answers this question leaving no scope for any doubt in different parts of his bhAShya-s. For our convenience, we may subdivide the question into two parts. The first part is with respect to the body of the “now liberated individual” and the second part is with reference to the Consciousness which thus far appeared ‘as though’ confined within the body.

Before we enter into the answers provided by Shankara, we should always keep in mind an important and unforgettable caution that circumscribes all the answers so that we are not carried away by the models used for merely teaching purposes. In Shankara’s own words:

Meaning: We hold that it is the definite conclusion of all the Upanishads that we are nothing but the Atman, the Brahman that is always the same, homogeneous, one without a second, unchanging, birthless, not-decaying, immortal, deathless and free from fear. Therefore, the statement, ‘He is merged in Brahman’ (this text), is but a figurative one, meaning the cessation, as a result of knowledge, of the continuous chain of bodies for one who has held an opposite view. (Translation: Swami Madhavananda).

What happens to the body after Self-realization?

Shankara explains in his commentary in the brihadAraNyaka:

“But how is it that when the organs have been merged, and the body also has dissolved in its cause, the liberated sage lives in the body identified with all, but does not revert to his former embodied existence, which is subject to transmigration?”  —  4.4.7, BUB.

“Here is an illustration in point. Just as in the world, the lifeless slough of a snake is cast off by it as no more being a part of itself, and lies in the anthill, or any other nest of a snake, so does this body, discarded as non-self by the liberated man, who corresponds to the snake, lie like *dead.* Then the other, the ‘liberated man identified with all-who corresponds to the snake-although he resides just there like the snake, becomes disembodied, and *is no more connected with the body.*”  —  4.4.7, BUB.

He adds further: “Because formerly he was embodied and mortal on account of his identification with the body under the influence of his desires and past work; since that has gone, he is now disembodied, and therefore, immortal.”  —  4.4.7, BUB.

Thus, it is a ‘virtual death’ for the body!

What happens to the Consciousness part after Self-realization (figurative merger)?