A question that is often asked of me is why YogavAsiShTa is not as popular as Bhagavad-Gita.

[Frankly, I am not sure if that is true and if so why it is so. I spell out a few of my thoughts to start a healthy discussion.] 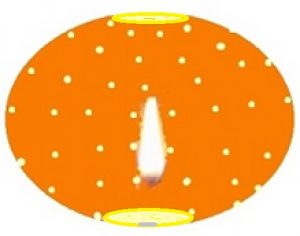 In my own case, it was Bhagavad-Gita that I was first exposed to, even as a teenager, and it was much later in my life after my pate turned bald and the few hairs that remained acquired a silver gray hue, that I happened to study YogavAsiShTa. I can say with certitude that both books must have been equally present in my house when I was growing up with my parents. Could it be that my parents somehow conspired to see that I did not get access to read the YogavAsiShTa in my youth because of my mother’s apprehension or belief in an adage that was popular in those times that one who reads YogavAsiShTa would surely fling the family life and retire to a forest as a Sannyasi (renunciate)?

Perhaps, I would have? I do not know to this day. Could that be a reason enough for YogavAsiShTa being not that widely popular among the modern spiritual aspirants?

Whatever may be, without a doubt, YogavAsiShTa is a very powerful and profound text, a treasure house in fact, on Advaita Vedanta that comes with the bold and unabashed declaration that anyone reading it diligently cannot but clearly see the falsity of the phantasmagoric world and realize his/her true nature.

For example, we have in YogavAsiShTa:

“[YogavAsiShTa] takes one to the highest Bliss which is beyond pleasure and pain. It’s the means to Liberation, I shall narrate to you, Rama, listen.”

“Having studied, understood and realized its philosophy, one does not stand in need of any other performance (askesis, meditation, mantra chanting etc.) for liberation.

“Having learnt the methods of liberation, expounded in this work which brings about direct Intuition, even a child comes to realize the Self.”

Swami Ramatirtha, one of the greatest saints of modern India and a great Vedantin, said in lecture in the USA:

“One of the greatest books, and the most wonderful, according to me, ever written under the Sun is Yogavasishta, which nobody on earth can read without realizing God-Consciousness.”  (Ref: In Woods of God realization, Delhi Edition, Vol III, p: 295).

He also added that “This work is clear, comprehensive and written in a real and true poetry.” (Ref. ibid, p: 327).

Prof. B.L. Atreya in his commendable work, “The Philosophy of The Yogavasishta – A Comparative, Critical, And Synthetic Survey of the Philosophical Ideas of Vasishta as Presented in the Yogavasishta Maharamayana” (published by The Theosophical Publishing House, India, 1936), alludes to a saying about YogavAsiShTa among the Vedantins. He writes that “it is a work of siddhAvasthA, i.e.  for the Philosopher-Yogi, who having mastered the theory, is passing on to the practice of it, while the other well-known works, even the Gita, Upanishads, brahma-sUtra-s are works of sAddhanAvasthA. i.e. for those who are yet trying to master the theory.”

Dr. Atreya was certain that YogavAsiShTa played a significant role in the thought process of the Advaita philosophers throughout the history of its development. He said that “a comparative study of YogavAsiShTa with the vairAgya shataka and vAkyapadIya of Bhartrihari, with the mANDUkya kArikA-s of Gaudapada, with the vivekacUDAmaNi of Shankara and with the mAnasollAsa of Sureshwara will clearly reveal the influence which the YogavAsiShTha exercised over these illustrious thinkers of the Advaita school of thought.”

In addition, an examination of the many of the minor Upanishads reveals that several of them are wholly or partially composed of the shloka-s quoted verbatim from YogavAsiShTa.

It is interesting to note a significant contrast between these two highly revered texts. Bhagavad-Gita is the spiritual teaching by the Lord Himself (who was born as Krishna, an avatar, in the Yadava dynasty) to a human being (Arjuna – a Pandava Prince of the Lunar dynasty). Arjuna was almost in his eighties when he received Krishna’s instruction.

In contrast, YogavAsiShTha is a teaching by a human being (Sage Vasishta, the first son of Brahma, the Creator) to the Lord Himself (who was born as Rama, an avatar, a Prince of Solar dynasty). Rama was hardly a lad of 12 years when he was taught the supreme philosophy.

Both the texts have, however, one commonality. The teaching was to an ardent seeker who was mentally dejected, depressed and indecisive about the future course of action.

Bhagavad-Gita encouragingly allows a seeker even to meditate on a personified form of a God-head. Krishna admits:

Meaning: For those who are set on the unmanifest (attributeless brahman), the path of realization is full of tribulations. Worship of the unmanifest is exceedingly difficult for the embodied beings.

In the later verses, He concedes worshiping Him (in the form of Krishna) will help the seekers to transcend the world.

Meaning: The prayer of a Non-Vishnu to Vishnu will not yield any result. Yes, I am Vishnu now. One has to become a Vishnu and then worship Him.

Shankara also supports this view in his introduction to his commentary on  विष्णु सहस्र नामस्तोत्र (viShNu sahasra nAmastotra) citing the shloka:

Sage Vasishta gives much more importance to dispassion and detachment in the pursuit of liberation, compared to meditation. He says:

The main focus in “YogavAsiShTha is on conveying the Non-dual message clearly to the seeker anticipating all his possible doubts. It avoids polemical arguments and is not concerned with debating other systems. A wide spectrum of models are used in imparting the Non-dual teaching – from the most traditional shravaNa-manana-nididhyAsana to Neo-advaitic concept of none to teach or to seek.”

Sage Vasishta foresees and presents what Shri Krishna would be teaching Arjuna in a future epoch (Yuga) – (vide the sarga-s  52 to 58 of YogavAsiShTa, Chapter 6, Part 1). About 27 verses of YogavAsiShTa in these sarga-s are exactly or almost the same that one finds in the present day Bhagavad-Gita. These 27 verses occur distributed in different chapters of the Gita – from the 2nd to the 18th chapters.

The presently available Bhagavad-Gita comprises 700 verses. The authorship for the compilation for the 700-verse version of the Gita is usually attributed to Shankara. Some experts opine that the original Bahgavad-Gita had 745 verses whereas some others claim that it was much shorter. Whatever it may be, it looks that Bhagavad-Gita has become much more popular only after Shankara. It may also be noted that Shankara did not group the verses into the 18 chapters. That was done by later people.

Bhagavad-Gita’s popularity could also have been due to a historical quirk. The invading religious zealots propagating Islam and Christianity during the Medieval period in the history of India had one God to follow and one book as an authority for their belief systems. The ancient Indian spiritual tradition was based on a number of sometimes even vastly divergent texts. The sanAtana dharma in vogue was more of an umbrella term holding the followers of several doctrines under it. Therefore, sanAtana dharma of India had no single text to represent what it stood for.

Also, there was no one sacred book, something comparable to the Bible or Quran, for the natives to swear by in the legal jurisprudence dispensed by the Muslim and the British rulers in the courts. Bhagavad-Gita which is considered to be an essence of  Vedanta quickly filled that gap. Thus Bhagavad-Gita did become much more known and commonly accepted spiritual text for the Hindus.

Shankara developed a graded system of teaching the Advaita philosophy, grouping the canonical texts into three categories. First came the Instructional group (upadesha prasthAna) consisting of the Upanishads. Next was the nyAya prasthAna (logical and analytic group) of brahma sUtra-s that helped the seeker in reflecting on what was learnt by him/her. Bhagavad-Gita came at the end as the sAdhana prasthAna, which was a guide for living the spiritual life of a committed aspirant. Bhagavad-Gita is like a life-strategy manual for the seeker after s/he has listened to and understood the teaching without having an iota of doubt left in him/her on the principle of jIva-brahmaikya (Oneness of the individual and the Supreme Self). The following table summarizes the teaching methodology promoted by Shankara:

Table: 1: The Three Phases in the Study of Advaita (based on brihadAraNyaka up):

The multidisciplinary approach in the Bhagavad-Gita makes it amenable to a range of interpretations that are attractive to the students of different tastes. The lilting lyrical style of the verses in the Bhagavad-Gita is quite appealing to a large cross-section of the people. These also could have been the contributing factors for its wider popularity, though in Shankara’s own scheme of things, it occupied the third palce.

YogavAsiShTha is addressed to a serious and advanced seeker focusing his/her attention on the ajAtivAda doctrine of the Advaita philosophy and does not get into the academic type of arguments or discussions with regard to the other philosophical concepts. It is not interested in popularizing or promoting any particular dogma and is devoted to expounding the ultimate Truth. The text does not aim at serving the normal run of the mill type of reader but concerns itself with deep philosophical expiation of the highest teaching as realized by the ancient Sages. A study of Yogavasishta thus requires a one-pointed attention and not mere curiosity and therefore, is not suitable for arm-chair philosophers or litigious debaters interested only in superficial discussions.

[P.S.: An aspect that is not considered here is whether the appeal in the character and life stories of Rama and Krishna and their relative popularity as Gods among the  public could have indirectly influenced the popularity of the two texts.

P.P.S:  I am thankful to my friend Georg who inspired me with his searching questions to prepare this Post .]

5 thoughts on “YogavAsiShTa vs. Bhagavad-Gita”