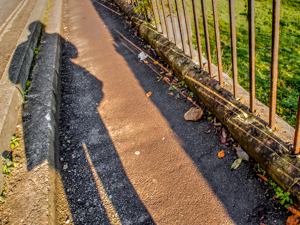 As you know, it is difficult to assess what another person ‘experiences’. It is also difficult to equate various words that might or might not mean the same thing to one person or everyone. Not sure if this is possible. Probably not. So, the following is not the gospel. I could be mad, mistaken, and a fool. Being foolish is not the worst thing. Feel free to call me names like Martin does.

For me, the word awareness has to constitute both subject and object. Someone or thing is aware. It is a function of the human being. We all have it and it is functioning right now. For me, all awareness functions within the context of self and consciousness, self and consciousness being virtually the same thing. I am talking about what constitutes self, not about self’s true nature. Self’s true nature has to be devoid of self completely and therefore out of the realm of all consciousness. Thus, it is also devoid of awareness as this is a function of our human nature, not our true nature. Normal death erases all experience and awareness but not our true nature.

Our human efforts can only concern itself with our human nature and that lasts maybe 70-90 years. To know thyself is a human endeavor that involves using observation. How else can we understand anything? Mind is involved to be sure. Everything we know is reflected in the mind. But this doesn’t seem to be the case with our true nature. Our true nature is not a reflection of our human life. No human faculty can know its true nature, only the human nature can be known. The only way we can ‘know’ our true nature is through the ending of this separate self that we call ‘me’, ‘I’, etc. And, it is not possible for our human nature to bring an end to itself. From what I have read of the sages, conversations I have had with sages (of course, the ones I think are sages!), it happens in a blink of an eye. You are simply swept away. It is a revelation, not an attainment. It is not a result. There are no levels of attainment, only levels of self. No true self. The body may remain, but no person inhabits it. True nature and human nature are not compatible. You can’t have your cake and eat it, too, as the saying goes.  To know the self is to forget the self. But forgetting the self is not erasing it from memory. It’s erased from your whole being.

As others have said our own existence is common to us all. By observing this sense of existence, me, self, being it, breathing it, living it, you by-pass all the mental analysis and duality that most are involved with. The sense of problem is relieved and a kind of centeredness that focuses this observation can be felt and deepened. This centeredness is a  gateway that our true nature reveals itself through and brings an end to all forms of self.

29 thoughts on “Awareness of Self”