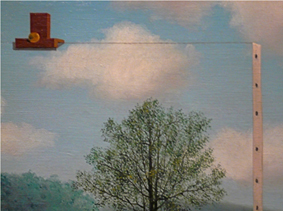 There is always someone richer or cleverer or wiser or more beautiful or more influential than me. In their presence I am unworthy and powerless. Poor unworthy me could lose all my friends to more attractive people, to cleverer people or to richer or more powerful people. I live my life dreading the moment that I will be found out to be a fraud or lose my job. Deep down I believe I am unlovable and that I will end my days sad and lonely. My fragile body-mind amalgam is not really up to the onslaught from the more powerful forces of the universe. I am not good enough to gain all the security I need to cushion myself from ‘the slings and arrows of outrageous fortune’ (as Shakespeare’s Hamlet puts it). My life (or the life of loved ones) can be wiped out in an instant by a monster wave or powerful wind or fire or earthquake, or a drunk behind the wheel of a car or a mugger or a mentally deranged person or by a tiny bug invisible to the naked eye. And even if the threat doesn’t come from outside, my very own biology can suddenly conspire to pack up: cancer, dementia, palsy, blindness, deafness, a blockage in the artery, stroke.

There may be those that protest that this is an unnecessarily bleak picture, that life isn’t that bad after all. They say they are happy; they have a good family, good job, nice home. They have a decent bank balance, go on nice holidays, have nice friends, enjoy a sound intellect. In a number of such cases, however, one finds that the happiness lasts only as long as the things that surround the person lasts. If the money runs low, tensions arise. If the marriage starts to wobble, the happiness wobbles in sympathy. If my friend betrays me, then my trust is shattered. In other words, such happiness is not deeply rooted in the person, but anchored instead to the shifting fortunes that grace bestows upon the person.

In any case, however happy a person says they are, it is unlikely that they match the standard that Vedānta sets for happiness The Taittiriya Upaniṣad says that one unit of human happiness is that enjoyed by a person who is in the prime of youth, endowed with good looks, has more money than they could ever spend, a sharp intellect, is virtuous, familiar with the scriptures. In short, this perfect person is one who enjoys just one single unit of human happiness. And this one unit of human joy – which few ever attain – is a very, very, very tiny fraction of the potential happiness that a person could attain. Thus, from the perspective of the pinnacle of happiness that is possible, even this one unit of human joy must look like misery!

Despite being told by Vedānta that nothing that I observe is absolutely real – not even my body-mind amalgam – and, moreover, that I am in essence no different from the essential reality of everything around me, I nevertheless persist in holding to my depressingly erroneous belief in the reality and separateness of everything. And I continue in my insecurity and unhappiness.

Vedānta defines what it means when it says that something is real: something real is that beyond which a thing cannot be reduced. It is the substratum of a thing. Is the dress real or is the cloth real? If one says that the dress is real, then it should be identifiable as having substantiality. Which bit is the dress separated from the cloth? The form dress cannot be without the substance cloth; so we conclude that in relation to the dress the substance cloth is what’s real – it can exist without taking the form of a dress. But on examination, cloth too is an effect. Thread is its cause. Thread is an effect, cotton its cause. In this way we try to get to that which is real, i.e. that thing which is not dependent on any other substance for its existence. A thing cannot be absolutely real if its existence depends on the existence of something else. But equally it cannot be said to be absolutely unreal either – the dress cannot be said to have no existence or said to be unreal. It is dependently real. This is what’s meant by mithyā.

For something to be an effect it must have a beginning, because it is born from a cause that was there before it came into existence. The birth of a dress from cloth, however, means that something else needs to come to an end: the form of the flat sheet of fabric in which the cloth existed before it was cut and stitched is no more. Forms change, but the underlying reality does not: the flat sheet is reshaped into the dress but cloth retains its nature as cloth. In other words, that which is real cannot have a beginning, or and end, and it does not change. By this definition of reality, there is very little in the world that can be said to be absolutely real.

So far in discussing cause and effect we have stayed at the material level, but there is a much subtler cause to everything we perceive and that is the very perceiver. If you take away the prceiver, things are as good as non-existent. Does a gugabuga exist? Maybe it does, but for all practical purposes, as far as everyone on this planet is concerned, the gugabuga is as good as non-existent because no one has experienced it. We continue to believe, however, that the things we perceive are real. Yes, says Vedānta, they are real, but not independently real. They depend on you, the perceiver, to lend them reality.

Thus, according to Vedānta’s definition of reality – i.e that which is eternal, not an object of perception, independent – nothing in this universe can be absolutely real! Not even our bodies or minds or feelings! Hang on, says Vedānta, the teaching will not go against experience: of course things exist, but they are not absolutely existent, they are ‘as though’ existent. What you take to be real is not absolutely real at all – it borrows its status of existence from something else, just as a colourless crystal borrows redness from the hibiscus flower near it. And because you take an imposter for reality, you end up in all sorts of trouble. There is, however, something that is really real.

As one would expect of the incisive Vedic thinkers, they don’t crudely divide the universe into real unreal. They postulate three levels of reality.

Vyāvahārika satyam, relative, transactional reality, is what we experience in the waking state. As it is perceptible to others it is said to be objectively real.

Prātibhāsika satyam is the universe we experience in the dream state. Since I alone can experience it within the mind, it is called subjective reality.

Both the above levels of reality are dependent, ‘as though’, mithyā.

Of course, one might argue, if reality is defined in the narrow way Vedānta does, then the universe we perceive, including our body mind sense complex, cannot be absolutely real. But that’s IF, and only IF, this is the only way to refine reality. What if there are other ways?

We can start by saying that because I can experience the world around me it is real. But then the challenge can be that you experience the dream world too. Aha, one might say, but the dream world vanishes when I wake and what I wake to is the world I left before I fell asleep: continuity of experience is what determines reality. Vedānta has a way of showing that this argument has its flaws too.

In the next instalment on this topic we will examine four alternative definitions of reality (like the ones above) presented to prove that the world experienced during waking is real. And also we will see how Vedānta refutes them.