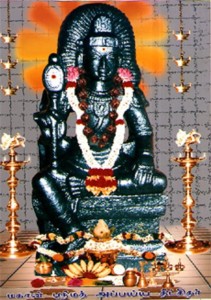 We, the traditional Advaitins, are a prejudicial lot – aren’t we?  Appayya Dikshitar’s words uttered in delirium when his brain was under the influence of the hallucinogenic Datura seeds are for us a beautiful AtmArpaNastuti in praise of Lord Shiva. But the mutterings of some other ordinary mortal with a differently affected brain is mere meaningless chatter unworthy of any notice. Let us not forget that both are actions done under conditions of an altered brain. And in both cases, an external agency is responsible for causing the change in the brain.

It was UG who famously said once that whether it was Beethoven’s 9th Symphony or pulling the chain in the WC sounded the same to him.  Some of the Zen Masters used to respond to the simple questions like “What is the time now?” with an answer that the mountain was running or some such response – totally frivolous and meaningless on the face of it. But their effort was to draw our attention to the way our mind functions in assigning ‘meaning and significance’ (which are actually not there) ever caught up in a habituated pattern which we  normally fail to detect.

Over six years ago, I prepared a comparative statement of the characteristics of an ordinary person and a ‘Self-realized’ man. I used the information  collated from many sources  that I could lay my hands on in preparing this tabulated compilation — almost like what a Purchase Officer does with the quotations (s)he obtains. There were several reasons behind this exercise of mine.First and foremost, of course, was the fact that those were the times when I was quite enamored and intrigued by the ‘concept’ of ‘jIvanmukta.’

Though Sage Vyasa presented what a ‘sthitaprajna‘ is in simple words in the second chapter of Bhagavad-Gita, many commentators that I read lifted the meaning to such lofty heights that I felt it to be something too remote to grasp, even by stretching my neck to the breaking point! The large number of references that I consulted did not help me much beyond simply stating that no outside  agency can distinguish an ordinary person from a “Realized” man. It was contended that neither the external physical features nor the observable behavioral traits will be able to show any difference between an ordinary man on the street and a Jnani..

Hence my primary purpose was the hope that a comparative tabular statement would help me to understand clearly in my own mind the differences between a jIva like me caught up in the web of mundane life and the liberated jIvanmukta free from all dependencies.  Next, I wanted to explore the possibility of developing some markers beyond physical appearances that could clearly differentiate the two – a jIva and jIvanmukta. Thirdly, I felt that the non-availability of such ready made table was a glaring gap in our scriptures.

Dennis was kind to publish my effort sometime in 2007;  because of some peculiar protocols of his site management, it shows that my article was “updated in 2012”! But I changed nothing there since 2007, I can assure you. The Table is available at the end of the article here:

[Note: Readers of the article “Meditations on Advaita” may find that the words “consciousness” and “awareness” were not used by me as synonyms. I followed  in those days the way Maurice Frydman used them in his popular book “I Am That.”]

I grouped the observable characteristics in the jIva-s and jIvanmukta-s into three major categories: How the world is viewed and is interacted with; how and what govern their actions; and what knowledge means to them. However, one important aspect did not get highlighted as much as it should have been. And that is about “time” — abiding as unchanging brahman, the jIvanmukta will forever be functioning in the “Now.” (S)he does not dwell in the past or future. It is only a jIva caught up in ‘thought’ that goes into reminiscing the past or projecting onto a future. A Jnani is eternally aware of only the present – like a room thermometer which does not know the temperature of even a nanominute ago or the would-be temperature after even a few seconds later. The thermometer senses only the current temp. It carries no history or memory. As brahman (brahmaiva brahmavid bhavati), a jIvanmukta too will have no memory disk.

Time is, in fact, defined as “avidyA-chit samyogah kAlah” (Time is the conjunction/admixture of avidyA and Pure Consciousness).  avidya being absent in a jIvanmukta, time cannot co-exist with him. Consequently, he is forever in the “Now.”

In very loose and general terms, we may say that a liberated man :

2.  Will be free from the claims of ‘ownership’ and ‘doership’.

3.  Will generally  (at least mostly) be happy and loving.

4.  Will not care for hoarding things or be worried for tomorrow.

5.  Will not be lost in reminiscing the past or planning for future.

6. Live without any concerns of image-building, personal appearance etc.

7.  Functions and lives in the “Eternal Now.”

I am certain you can add several other traits that you feel would be present in a jIvanmukta.

But I bet by now you must be getting curious what  the daily routine life of such an individual will look like and wondering if any detailed documentation is available about such a man without resorting to eulogizing or laudatory expressions.

I would like to talk in this context about two books that poignantly highlight the trials and tribulations of the persons who live forever in the moment. These are the stories that tell us about two unforgettable lives — Clive Wearing, a Professor of Music and HM, an ordinary person known only by his initials but whose contribution to our understanding of ‘memory’  is etched in golden letters. Both the personalities more or less satisfy the criteria we listed above for a Jnani.

One  book  is written by the wife who had to sacrifice her own life and career in taking care of her husband who lived only in the “present” and the other is a book written by a scientist who treated and studied the brain of the man who had no ability to record a memory beyond the immediate “present.”