[Nobody has obviously noticed or pointed out that the continuation articles have not been posted for two years! So I am proceeding with the Series of articles here a bit hesitantly as I am not sure of the Reader-interest. In these two years my computer lost the “memory” of my notes and files stored on the subject (thanks to the hackers from Nigeria). I am hence obliged to go by whatever material I could harness in the ‘now’ from my computer. Part – 1 here.   Part – 3 here .  ]

The main question of interest for us here is “How does the body of a Self-realized man live eternally in the ‘Now’ and function in the day to day life of eating, moving, acting and interacting in the absence of ‘memory’ of past experience/knowledge for recognition? What does “Now” mean for him/her? Is the “Now” on a temporal dimension?”

Whether we are consciously aware of it or not, it is impossible to lead a normal life in the world without memory. Maybe it is simply responding to when your name is called or you have to find a solution to a much more complicated problem of technology, memory plays a significant role. Therefore, before we venture to answer the questions on the functioning of a jIvanmukta‘s body, one could be curious to know about the lives of those who are  at a disadvantage in their worldly life because they do not have an access to their memory anymore . I shall list briefly a few such cases which are well studied by scientists. Their lives may look yet times hilarious and often poignant and heartbreaking but always harrowing to their care givers. 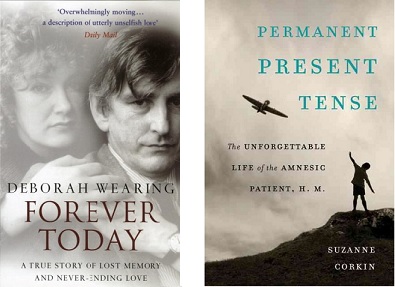 Clive Wearing: An eminent musicologist at Cambridge University. Each time he sees his wife, he runs tearfully into her arms as if it is the reunion of long-lost lovers when in reality she may have left the room minutes earlier. Without the ability to store new memories, Clive is permanently trapped in the here and now. He maintains a diary in an attempt to keep track of existence but this makes for painful reading:

Each previous entry is crossed out as he asserts that he has only just become conscious.

There was a movie also under the title, “Prisoner of Consciousness” on the life of this professor. His wife, Deborah wrote a book in 2005, with the title, “Forever Today.” She writes in that: “It was as if every waking moment was the first waking moment. Clive was under the constant impression that he had just emerged from unconsciousness because he had no evidence in his own mind of ever being awake before…. “I haven’t heard anything, touched anything, smelled anything,” he would say.

Henry Gustav Molaison (HM): At the age of nine, HM suffered head injuries in an accident that caused debilitating convulsions. In 1953, when he was twenty five years old, he underwent an operation that successfully relieved his symptoms. But another problem surfaced that something was terribly wrong.

HM could not retain new memories. Instead, he constantly lived in the present, greeting the same people several times a day with the same expressions, as if he were seeing them for the first time. Everything that went into his memory lasted only a few minutes before it disappeared. His long-term memory, however, was relatively intact and could remember his life before the surgery. But without a functioning hippocampus, HM was unable to record new experiences. For example, he would be horrified when looking in a mirror, since he saw the face of an old man but thought he was still twenty-five. But mercifully, the memory of being horrified would also soon disappear into the fog.

EP: His viral encephalitis infection wreaked havoc upon his brain: Large, bilateral, symmetrical lesions were found in the medial temporal lobe, portions of the brain responsible for formation of long-term memory; and whole, crucial structures were eliminated. Additionally, other brain regions had atrophied and white matter – the support fibers that transmit signals between brain structures – had become gliotic or scarred. Half an hour after lunch, he would have forgotten what he ate or if he had eaten at all. EP was utterly unable to learn anything new.

Jimmie G.: Jimmie’s scientific knowledge was that of a bright high school graduate with a penchant for mathematics and science. He was superb at arithmetical (and also algebraic) calculations, but only if they could be done in lightning speed. If there were many steps, too much time, involved, he would forget where he was, and even the question. Dr. Oliver Sacks says about Jimmie:

“….. He is a man without a past (or future), stuck in a constantly changing meaningless moment.”

One day I asked him: How do you feel?

‘How then do you feel about life?’

‘I can’t say I feel anything at all.’

‘You feel alive though?’

‘Feel alive? Not really. I haven’t felt alive for a very long time.’

But watch the same Jimmie in a chapel.

I saw an intensity and steadiness of attention and concentration that I had never seen before in him or conceived him capable of. I watched him kneel and take Sacrament on his tongue, and could not doubt the fullness and totality of Communion, the perfect alignment of his spirit with the spirit of the Mass. He was wholly held, absorbed, by a feeling. There was no forgetting, ….. but was absorbed in an act, an act of his whole being, which carried the feeling and meaning in an organic continuity and unity so seamless it could not permit any break.” (Copied from Dr. Sacks’s book).

Thompson: He remembered nothing for more than a few seconds. He was continually disoriented. Abysses of amnesia continually opened beneath him, but he would bridge them, nimbly, by fluent confabulations and fictions of all kinds. For him they were not fictions, but how he suddenly saw, or interpreted, the world. He, with quick-fire inventions, continually improvised a world around him – an Arabian Nights world, a phantasmagoria, a dream, of ever-changing people, figures, situations – continual, kaleidoscopic mutations and transformations. For Mr. Thompson, however, it was not a tissue of ever-changing, evanescent fancies and illusion, but a wholly normal, stable and factual world. So far as he was concerned, there was nothing the matter.  (Copied from Dr. Sacks’s book).

Dr. P.: A painter, and a more severe case of prosopagnosia.  The functioning of such people will resemble that of a machine. Dr. Sacks write:

“It wasn’t merely that Dr. P. displayed the same indifference to the visual world as a computer but – even more strikingly – he construed the world as a computer construes it, by means of key features and schematic relationships. The scheme might be identified – in an ‘identi-kit’ way – without the reality being grasped at all.” That tender delicate feelings of what we are as humans may be lost for them.

SM:  SM is a 44-year-old mother. Arachnids (spiders) or even snakes don’t scare her.  Horror movies or haunted houses just don’t bother her. When she was held up at knifepoint and gunpoint by some hoodlums or when she nearly got killed, she didn’t run for life; she just stood there fascinated. She has no ‘fears’ at all!  It was found that she suffered from a rare genetic condition that resulted in an illness which left her with “two perfectly symmetrical black holes where her amygdala should be.”

Roger: Dr. J. Feinstein and his coworkers studied for a decade and half the case of Roger, a patient with damage to amygdale and other limbic parts of his brain due to viral infection some 30 years ago. In spite of it, Roger lives a normal life for all practical purposes. “His IQ is above average; his speech and language abilities are excellent; his vision and hearing are normal. His attention, short term (working) memory and reasoning abilities are unimpaired. Roger appears, like a Yogi, unconcerned by his condition. He is always happy. Moreover, based on his family’s report, Roger is paradoxically happier now than he was before his brain damage!”  He, however, suffers from a global loss of memory. He has no sense of taste or smell.

I shall  report in the next part the reply given to my questions on this matter by Peter Dziuban , a highly respected Teacher of Non-duality and the author of books like “Consciousness Is All,” “Simply Notice,” “Timeless Infinity” etc. .

14 thoughts on “Living In The Moment Eternally – 2”