Your post made me realize that I have rarely, if ever, encountered any definition/explanation of the concept of time in Advaita. It set me off on a search of my library to try to find something. Apart from those books which index every word they contain (e.g. Krishnaswamy Iyer’s ‘Vedanta or the Science of Reality’ has 107 page-references to ‘time’), I could not find anything in any of my physical books. A search of my electronic database came up with very few references and the only scriptural one I could find is from Vivekachudamani 497:

END_OF_DOCUMENT_TOKEN_TO_BE_REPLACED

Q: If we consider humans as finite beings, what evidence do we have that ‘eternity’ has any meaning? (Quora)

A (Martin): It is difficult to fathom what time, and timelessness, are. When confronted with such a conundrum, St. Augustine retorted: ‘If no one asks me, I know; if I want to explain it to a questioner, I do not know’ — such are the limitations of our understanding of reality (physical and non-physical), even though physics and mathematics come to our aid in this and also with the phenomenon of space (space-time). What is more, philosophy and metaphysics have a better grasp of the non-physical dimensions of reality than science, aided and abetted as they are by (universal) intuition. For metaphysics, time does not exist outside of our minds, and it is the same, by implication, with the concept of the ‘present’, even though the latter is what gives a semblance of reality to reality tout court (all that is and ever has been) – almost incomprehensible to the ordinary mind. The concept of space is in the same category. In Advaita Vedanta space (Akasha) is postulated as the subtlest of the five physical elements, which gives rise to the other four and is characterized by pervasiveness. Three types of space are considered: physical, mental, and intellectual or spiritual.

OM iti etad akSharam – Thus, this syllable OM
idam sarvaM – (is) all this.
tasya upavyAkhyAna – The explanation begins with this:
oMkAra – the syllable OM (is)
iti eva – thus truly
sarvaM – everything –
bhUta – past,
bhavat – present
bhaviShyat – (and) future.
yat cha anya – and what is other than
atIta – transcending these
trikAla – three time periods
tat eva – even is that only
oMkAra – OM
api – as well.

The syllable OM is everything. The explanation follows (with this Upanishad). All that is past, present and future is OM. And, whatever is beyond the three periods of time, that too is only OM.

END_OF_DOCUMENT_TOKEN_TO_BE_REPLACED

Q: How can the mind perceive something which is outside of time, when the mind itself is caught in time like a prisoner? Perception in itself is a movement in time so how can mind even claim to perceive the concept of Brahman and say that Brahman is eternal?

A: The mind cannot perceive anything ‘outside of time’. As you say, perception occurs within time (and space). And, more to the point, that which you perceive is also within time and space. Thus, you can never perceive Brahman. But conceptions are not quite the same. The concept itself is in the mind, which is also limited. But what is conceived is not limited. You can conceive of a unicorn with no problem at all, even though you also know that they do not really exist. Scientists also conceived of black holes, long before any proof was found for their existence – and still no one has ‘really’ perceived such a thing.

But perhaps the simplest way of thinking about it is to consider deeply who you actually are. It is possible to eliminate body, sense organs, mind, and anything else that you can think of as ‘not I’. But it is not possible to eliminate the one who is doing this. There has to be an ‘ultimate subject’ after everything else has been eliminated. That is who you really are and that is Brahman.

END_OF_DOCUMENT_TOKEN_TO_BE_REPLACED

Did Einstein write: “Reality is merely an illusion, albeit a very persistent one”?

“People like us, who believe in physics, know the distinction between past, present, and future is only an illusion, albeit a stubborn one.”

That quote has itself been a recurrent one, but, as a very accomplished acquaintance of mine, Tom McFarlane, has written:

“There is no source for that, because Einstein didn’t say it. It is not consistent with his views. For Einstein, reality is what is true, not what is illusory.

END_OF_DOCUMENT_TOKEN_TO_BE_REPLACED

If we consider humans as finite beings, what evidence do we have that “eternity” actually exists?

Physical bodies are finite, corruptible, but are human beings just their bodies (and their finite minds)? There is a mysterious, undefinable, and unmeasurable entity called consciousness which appears to pervade all sentient beings and nature in general. Nature, all life, is conscious – dare we say? This entity – consciousness – is undeniable, for it is our most direct and unfalsifiable experience. Consciousness – by consensus of a majority of physicists – escapes all parameters of physics, neurophysiology, and brain studies. But not only consciousness, but so-called matter is also in the same category of the intrinsically unknowable, even if there are methods for measuring and experimenting with such entity as matter-energy.

Again, no one knows what eternity might be, such are the limitations of our means of understanding reality, even though physics and mathematics come to our aid in this and also with the phenomenon of space (space-time). What is more, philosophy and metaphysics have a better grasp of the extra-physical dimensions of reality aided and abetted as they are by (universal) intuition. For metaphysics time does not exist outside of our minds, and, rather than eternity-(duration), timelessness – or what is the same, that only the PRESENT exists – is what, as a concept, gives a semblance of reality to reality (all that is and ever has been) – incomprehensible to the unaided mind.

From the viewpoint of Advaita Vedanta (and I believe also zen and Dzogchen), time is not just something elusive, but ultimately unreal – only an idea or concept. The same can be said about the concept of ‘now’, which cannot be elucidated or measured in any way. ‘Now’ can only be a symbol of eternity, immeasurable but always present. ‘Eternity’ itself is a symbol or slanted conception of reality or existence/being, which is timeless. For the absolute time does not exist. Consciousness alone is real and, thus, timeless. Stated differently, ‘what is never ceases to be; what is not never comes into being’ (Shankara). Parmenides, Gaudapada, and Shankara were strong in that position.

1) How is one’s self related to other selves.

This can be seen from two perspectives: 1) lower or empirical, and 2) higher or spiritual (I try to avoid the word ‘metaphysical’). I am not going to consider what Christianity or Islam hold about any of these two perspectives, only the non-duality of Advaita Vedanta (Buddhism does not contemplate individual existence per se). According to the Advaitic tradition the individual self (jiva) can be considered as a reflection of the higher Self and then his/her faculties (basically memory, mind, and sense of self) as well as all bodies are separate and individual – this pertains to ordinary, transactional life. This is the realm of ignorance (avidya). END_OF_DOCUMENT_TOKEN_TO_BE_REPLACED

Q: I’m aware that I’m on (very) shaky ground when I talk/think about brahman. But there’s something that’s been bugging me for a long time now about the ‘definitions’ of brahman I’ve read.

Brahman is always described as changeless and eternal.

Let’s start with ‘changeless’. When I think (conceptualize, make images) about a changeless ‘force’ (for want of a better non-object word), I envision something static and dead, without animus, without vitality. Absolute zero, utter lack of motion/vibration, fixed-ness. But I can’t put this static-ness together with brahman, the ‘mother of all existence and vitality’. How could utter stillness give rise to such a vibrant universe?

Onto ‘eternal’. Why does brahman have to be eternal? Why couldn’t it have arisen with the Source Event (Big Bang, etc.) and evolved into its ‘current’ fullness? Likewise, why couldn’t it end with the collapse of the universe back to a zero-dimensional point?

So changeless and eternal elude/confuse me. But I suspect that’s because I’m trying to image-ine them, which is an oxymoron: conceptualizing the non-conceptual. END_OF_DOCUMENT_TOKEN_TO_BE_REPLACED 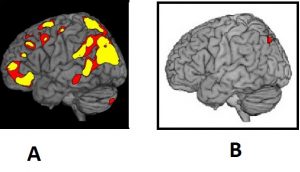 Let us recall that living in the Now is an important trait of a jIvanmukta. J. Krishnamurti wondered if we could have an experience but not record it in our brain as a memory so that all our experiencing will be ever in the Present, in the innocent Now, afresh and always anew from moment to moment. END_OF_DOCUMENT_TOKEN_TO_BE_REPLACED