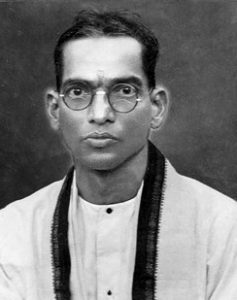 What I write in the next 3-4 Posts will be a copy paste type of job from the magnum opus in the Telugu language authored by my Father, late Shri Vemuri Srinivasa Rao, a Lawyer. The reference is:

“pUrvagAthAlahari – An Anthology of the Stories of all People and Topics Arranged in an Alphabetical Order from the Eighteen purANa-s,” by Vemrui Srinivasa Rao, Venakatrama &Co, 1958.

Narada was the son of Brahma. He originated from Brahma’s thigh. He had neither a family nor any offspring. He never stayed in one place. The reason for that was the curse he received from Daksha. He wandered through all the worlds playing devotional songs on Lord Vishnu on Mahati (Mahati is Narada’s vINa – a stringed musical instrument).

Narada collected news from each of the countries he visited. He helped people in need to the extent he could. He consoled and brought peace to the minds of those in trouble by teaching them meditation on the Supreme God. He comforted Akampan who was grieving his son’s loss by explaining to him about the inevitability of ‘death.’ He narrated the stories of Sixteen Kings to Srinjaya to end his sorrow and later he brought his son back to life. He saved the life of Lilavati from being killed by Indra by informing him (Indra) that she was pregnant with a great devotee of the Lord.

Dharmaraja used to consult Narada regarding moral values. He suggested to both Rama and Lakshmana that they should pray to Garutman (Kite God and vehicle of Vishnu) when were captured by Indrajit using the Snake weapon. Those were but a few of the many examples where he came to the aid of people offering them succor and peace of mind.

Maharshi Narada could never keep any information known to him to himself. It was he who informed Sage Valmiki that Lord Vishnu would take birth as Rama. His inability to keep a secret and revealing what he knew to each side of opposing parties often resulted in big combats. But he used to enjoy that. He earned the epithet of ‘Kalahabhojana’ (a Relisher of Conflicts) for there was none who could outdo him in causing quarrels. In spite of that, nobody showed disrespect towards him. It was so because whatever fights happened due to him, they used to turn out to be in the larger interests of the public.

The demon Jalandhara could not be vanquished by the gods. They approached Narada for help. He assured them that he would think of a solution for their problem and sent them away. He immediately proceeded to Jalandhara’s place. He praised Jalandhara highly. He predicted that Jalandhara was blessed with the riches of horses, elephants, palaces and so on but was not fortunate to possess a noble queen. Jalandhara asked for a remedial measure. Narada said that Shiva who lived in graveyards did not need Parvati as his wife and provoked Jalandhara to get her. Jalandhara tried to take her and in the ensuing battle Shiva killed him.

Narada went to Garuda (Kite God and enemy to serpents) and incited him to fight against serpents and should not remain a spectator while his (Garuda’s) mother was forced to be a maid to them. When Narada came to know that Varuna eloped with the wife of Utathya, he carried the news to Utathya and asked him to get her released from Varuna’s clutches.

A Western King by name Kalayavan was very proud of his military strength. Narada incited him to fight with Krishna who vanquished Jarasandha. He provokingly asked him whether he was aware of it or was afraid of facing Krishna. Kalayavan then seized Mathura. A war broke out and Kalayavana was killed in the battle by Muchikunda.

Narada was Gandharwa (a celestial being) by name Upabarhana during the earlier Mahakalpa (epoch). Creators were performing a ritual called devasatra and invited Nymphs (Apsaras) and Gandharwas for singing hymns on Narayana. Upabarhana, instead of joining the singing team, busied himself with women-chasers. The creators cursed him to be born in a low caste house. Consequently, he was born as the son of a maid in a Brahmin’s house.

Narada, who was born to the servant in the household of Vedic Pundits in his previous life, used to serve various holy men camping for four months at one place. As he was thus associated with Sages from a young life, he was able to obtain Self-Knowledge to some extent. His mother died of snake bite while she was milking the cows. After his mother’s death, Narada in a way felt happy to be free from familial obligations. He traveled northwards and reached a thick forest. He spent time in the forest contemplating on Ishwara.

Though Ishwara manifested in front of him, Narada could not see Him. He tried to think of the form of Ishwara, but he failed in that too. However, he heard the remote voice of Ishwara speaking to him thus: “You cannot see my form which is visible only to a few noble Saints. The current cycle of creation will end. You would leave your current mortal coil. Then you will be able to see me with our permission in your next life.” In course of time, dissolution of the creation phase commenced.

Narada left his gross body, and entered a pure subtle body by the grace of Vishnu. Later he entered into Brahma riding on his breath. He then took birth again as a descendant of Brahma along with noble saints like Marichi.
(To continue …. Part – 13).