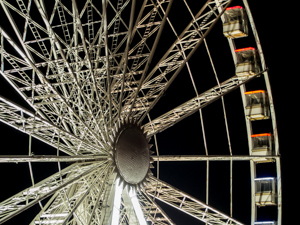 The following is an extract from Chapter 7 of Vidyaranya’s Panchadashi:

[7:174] Never forgetting that the world is unreal and its cause unascertainable, the wise man stands secure from harm in the midst of the enjoyment of his fructifying karma.

[7:175] The function of knowledge of the real is to promote (constant) remembrance of the fact that’ world is unreal; that of the fructifying karma is merely to provide the jIva with experience of pleasure and pain.

[7:176] The knowledge of the spiritual truth and the fructification of prArabdha karma refer to different objects and are not opposed to one another. The sight of a magical performance gives amusement to a spectator in spite of his knowledge of its unreality.

[7:177] The fructification of karma would be considered to be opposed to the knowledge of truth if it gave rise to the idea of the reality of the external world; but mere enjoyment of an experience does not imply the reality of what is experienced.

[7:178] The imaginary objects seen in a dream become sources of joy and sorrow to no small extent; we therefore infer that the objects of the waking state can do the same (without being real).

[7:179] If knowledge of the real destroyed the world it would be incompatible with the continued presence of the fructifying karma. But it does not do so. It “destroys” the world only in the sense of producing the conviction that it is a mere illusory display (a mAyA).

[7:180] People know a magic show to be unreal, but this knowledge does not involve the destruction of the show or deprive them of their enjoyment of it. It is the same with one who has the conviction that the objects of the world are a mere illusory display (a mAyA).

[7:181] But (against all this it will be said that) there are many passages in the shruti which teach such doctrine as “but when he has become the Self of all this (universe), then who will see what and with what organ what will he smell, and what will he say?” Vide, for example, Brihadaranyaka Upanishad II.4.14 and IV.3.19-32 and Chandogya Upanishad VII.24.1.

[7:182] Therefore, (the argument will run,) spiritual vision depends on the destruction of the phenomenal world and occurs in no other way. This being so, how can the illumined man enjoy the objective world?”

[7:183] Our reply is: “The shruti-s upon which this objection is based apply to the states of deep sleep and ultimate enlightenment.” This is clearly stated in Brahma Sutra IV. iv. 16. ‘Ultimate enlightenment’ here means liberation after death (videha mukti). As explained in the Brahma Sutras IV.4.16, the shruti-s in question do not apply to liberation in life (jIvanmukti).

[7:184] If this is not accepted, we cannot account for the efforts to teach made by such sages as Yajnavalkya. Without a knowledge of duality they could not teach, and with it their illumination could not be called Complete.

If there were no recognition of duality teaching would be impossible.

10 thoughts on “Panchadashi and Prarabdha”