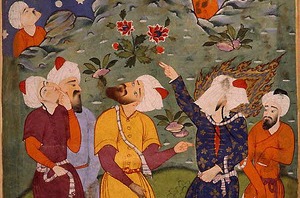 M. The brain… understanding philosophy? My reply to this is similar to the one I gave recently to another question and which was based on Socrates’ answer to an observation that someone was making. The man saw a pool of water being stirred by a stick held by a man and said that the stick was stirring the water. To which Socrates replied: ‘Is it the stick, or the man moving the stick?’ (Which one is the real agent – the material, or the instrumental cause, in Aristotelian terms?).

Equally, is it the brain, or the mind which ‘moves’ the brain which moves the stick which stirs the water?

Is it the brain, or the mind which (using the brain as an instrument) understands philosophy?

2. How does the theory of quantum mechanics affect our picture of consciousness?

M.The two notions (QM and consciousness) are in-commensurable in all respects, which should be obvious: a) QM is a theory referable to reality or an aspect of reality (the microcosm); consciousness, on the other hand, is an established fact, not a theory – not only a fact but that which is behind, the substratum of, all facts and movements of the mind. b) The reality that is consciousness does not need to be proven for it is immediate, direct, unstultifiable or unsublatable – everything else: objects or phenomena, thought-constructions, etc. being stultifiable.

That means that there is not even an approximation between the theory of QM and reality per se. It would be a category mistake to relate one to the other, unless using such exercise as an analogy. In this sense, there are two or three things that can be said: 1) Reality/consciousness is limitless, like the referent (or an aspect thereof) of QM, but the former is un-measurable, unlike QM which is amenable to measurement/quantification and statistical verifiability. 2) Reality is non-local (Bell’s theorem), like QM. 3) Consciousness/reality does not depend on anything, while QM is theory-dependent.

3. What are some scientific arguments for consciousness being able to preserve itself after the death of body?

M. There are some ‘facts’ or experiences by individuals in favor of what goes under the name of NDEs (near death experiences) and LAD (life after death), but I will restrict my answer to the teachings of Buddhism and Advaita Vedanta – and my own convictions (for what they are worth). And that, without holding a belief in the naive or popular notion of reincarnation, that is, reincarnation of the body

Consciousness (aka awareness), being the only or ultimate (exclusive) reality from the metaphysical viewpoint, is not in need of preserving itself at any time. It simply IS, and is beyond the time dimension, which is an unreality for IT. This means that there is no death – of anything or any being – , only apparent transformation of phenomena properly so called. ‘I’ (‘you’) am not a phenomenon. ‘I’ am consciousness, pure, indescribable, and immutable. Obviously, by ‘I’ I don’t mean this body-mind.

Similarly, your beliefs regarding consciousness are not scientific arguments. Attempting to use faith-based philosophical statements in place of scientific arguments is like trying to use colors to describe flavors. Even if it makes sense to you, it’s non-transferable and definitively different.

In other words, your statements may be interesting, but did not address the question that was asked.

M. Agree about ‘facts’ and scientific arguments. You will have noticed that I wrote ‘facts’ between apostrophes. Secondly, I also said that the view-point from which I wrote my answer derives from Buddhism and Advaita Vedanta, therefore it is philosophical. Do you think that all philosophy is irrational, or non-rational? That would include philosophy of mind, phil. of science, of mathematics…

Also, I did address the viewpoint of science re NDE, etc., given that there is continuing empirical research in these areas by brain scientists and neuro-physiologists. They work with data and, obviously, with some theories.