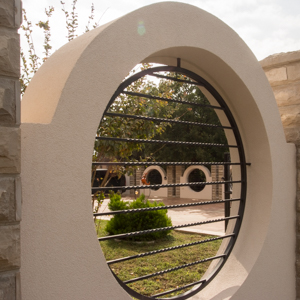 The mind in Sanskrit is antaHkaraNa. It is the seat of both thought and feeling. It derives from antar – within, interior – and karaNa, which means “instrument” or sense-organ. The mind consists of a number of separate functions – manas, buddhi, chitta and ahaMkAra. The buddhi is responsible for discrimination and judgement, perhaps nearest equated to the intellect in Western usage. It differentiates between pairs of opposites, particularly between transient and eternal. In terms of the ‘spiritual development’ of a man, it is the most important function of the mind, since it is able effectively to exercise control over all of the rest of the body-mind instrument. Without it, we are no better than animals, driven by primitive instincts and selfish, acquisitive urges.

The metaphor of a horse-driven chariot is used to describe this in the scriptures (Katha Upanishad). The elements are a chariot containing a passenger and a charioteer who uses reins to control the horses that are pulling the chariot. If the charioteer does not keep a tight hold on the reins to direct the horses in the desired direction and instead allows them to go where they will, they will wander down whichever road takes their fancy. The chariot represents the physical body, pulled by horses representing the wayward senses, which will stray according to their own interests. The mind is represented by the reins, which keep the senses in check, providing they are controlled by the intellect, using its powers of discrimination. The passenger in the chariot is the jIva, the ‘individual’ Self, the observer of all this who does not actually take part. The ego doesn’t exist of course – it results from the mistaken identification of the Self with the rest of the equipment. Finally, the destination is the Atman, the true self.

Buddhi can only operate optimally in the presence of sattva guNa, i.e. in stillness, without interference from manas, and in the present moment. The thinking mind, manas, cannot itself make decisions. chitta, in which memory functions, can throw up lots of information from the past – what has been heard or read etc. – and manas can churn over all of this, apply logic and so on. It is particularly useful in using doubt to question all of the possibilities. On its own, however, all will just become more confused as more and more is added to the equation. In order for discrimination (viveka) to function, manas needs simply to keep quiet.

Without a discriminating intellect, control of mind and restraint of senses, there can be no clarity, no discrimination of pairs of opposites, no purification of mind, no Self-realization. The jIva will remain trapped in saMsAra.

One final point here, courtesy of Dr. Sadananda in his reviewing of this material: Vedanta differentiates between what is called ‘sharp’ intellect (tIkShNa buddhi) and ‘subtle’ intellect (sUkShma buddhi). The former is the analytical mind characteristic of the scientist who, as the saying goes, finds out more and more about less and less until he knows everything about nothing. It is the latter that we need to cultivate. This is the ability to integrate rather than divide, to see the unity in diversity.