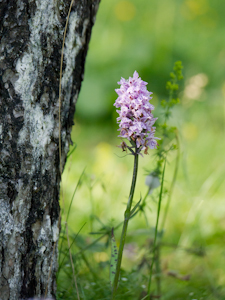 An Overview by C.S.Baskaran
(Part 4 – final)

Refutation of the claim by the Dvaitin that “A Principal statement like tat tvam asi is neither acceptable nor can be rejected. It does not serve any purpose”

A Principal sentence negates the identification with the three gross, subtle and causal bodies for the seriously inclined student of Vedanta and such identification is the cause of the birth and death cycle. It generates the knowledge of the self (which equates to liberation) instantaneously. If one can accept the God and Creation through the Veda pUrva (karma kANDa) texts, why not accept the same Vedas’ Principal statement “tat tvam asi” as equally valid? When a sincere seeker is taught a Principal statement like “tat tvam asi”, “aham brahmAsmi”, “ayam Atma brahman” etc, his or her own attachment to the body certainly goes away. But, in the case of ordinary people, the false notion continues, in spite of repeated hearing of the above texts. Without the removal of false identity with the body-mind-intellect complex the transmigratory existence through cycles of birth and death cannot end.

Suppose the Principal statement “tat tvam asi” speaks of some action in the form of meditation etc, what result will the meditator get?

Since (according to the opponent) the meditator has transmigration as the essential nature due to ignorance, any extent of meditation effort cannot bring oneness of the individual self with Brahman (amRRitatvam), even if it were granted that meditation leads to oneness with Brahman. The individual self under no circumstances would like to abandon its natural form. The opponent cites in support of his arguments examples such as an elixir mixed with any metal turning into gold, gold with silver, and milk with water, as metaphors for the oneness of  the individual self with Brahman. But all such impressions of the mixing remain temporary and fade away in time. It is well known that anything which is a product or process is not eternal, and will definitely perish. In the same way will be the result of meditation. If liberation is absent today and is generated through meditation, it would be like any Vedic ritual resulting in a fruit of action that is impermanent. The individual self and Brahman are of opposite attributes according to the opponent and even if union takes place between them it will be short lived, as every union ends in separation, which is considered as liberation by him.

According to Vedanta, liberation is not something attainable through action newly, since the individual self is absolutely non-different from Brahman. The so called difference is only ‘as though’, being caused by ignorance. Knowledge of the self through Upanishadic statements like “tat tvam asi” removes the ignorance, revealing the true nature of the self. Hence, the Principal statement is not an injunction prescribing an action through meditation on Brahman. It only removes the erroneous notion “I am this body”, “this is mine” etc.

In all the Upanishads, the Principal statements express the individual self and supreme self (Brahman) in the same case ending relation, and aim to establish the non-difference. Therefore they all should be interpreted by an intelligent student only in the way the analysis has been done before. Just like a prince (in a parable often referred to in Vedanta) who was raised as a hunter and whose original status was revealed by a person who knew the truth, the Principal statement removes the ignorance of the individual self. In the same way, one should drop the attachment to the gross, subtle and causal bodies intrinsic in the ideas “I am the body”, “this is mine” etc, and ascertain that the imperishable Brahman is his own self. Understand that the supreme Brahman is not the mind, nor intellect, nor the senses; that it cannot be the three Gunas (sattva, rajas, tamas), nor the five elements (earth, water, fire air and space); and abide in Brahman. Brahman is of the nature of pure consciousness and hence cannot be the mind etc., which are insentient and finite.

On the triple stream of experience, namely waking, dream, deep sleep and the fourth state (turIya)

In the waking state, the mind with sense organs, both of knowledge and actions, are fully operational in worldly transactions. These experiences are gross in nature, pertaining to the outer world. This is in no way related to the indwelling self that is the substratum of all types of experiences. When all the sense organs are resolved and the external world/sense objects are absent, there is the manifestation of all the impressions of waking state that is called the dream state (svapna) by the wise people. Without any objects experienced corresponding to either an external world or dream world, that condition of the mind is termed the deep sleep state (suShupti). The three states of waking, dream, and sleep belong to the mind and not to the substratum of all the three states. This substratum, the self, is known as (turIya or chaturtha) the fourth. The three states are superimposed on the self due to ignorance. One should understand this clearly and abide in Brahman, the self of all.

A rare analysis of the phenomenal world that is non-real, (mithyA) illusory

This entire Universe is non-real (asatyam) because it is an effect (kAryam), beginning with space and ending with earth. All sense organs, sense objects, intellect, mind, etc., are non-real, proclaims the Upanishads. World is only name and form (nAma rUpa ), as said in Ch.Up. VI. “vAchArambhaNa vikAro nAmadeyam….”. Brahman alone is the intelligent cause, as well as the material cause, visualizing this entire Universe. This body is supported by the three humors namely phlegm, bile, and air (kapa, pitta, and vayu) that keeps it healthy when in balanced condition. Similarly, this universe is supported by sun, moon, and fire (sUrya, chandra, agni) from origin to the dissolution of the Universe. They are glorified in the shruti as the cause but declared to be non-real later. Similarly, the three colors red, white, and black experienced in gross fire really belong to the subtle fire, subtle water and subtle earth, the elements. Thus, the fire-hood of fire vanishes, a transformation in the form of fire has only speech as its basis; it is a name only.

The different ornaments made of gold are all forms of gold, and the forms are given the names ‘necklace’, ‘bangle’, ‘ring’ etc. The forms, which are liable to change, are understood as unreal, while the gold that is perceived in all of them is never a variable, is real. The three luminaries sun, moon, and fire are compared to the ornaments as effects, while the three colors red, white, and black are compared to the gold ­– the cause that is real. Shruti proclaiming the unreality of the three luminaries through the examples given should be taken as a direction by the seeker, that all the products in time and space are all also unreal whereas the cause is not so.

In the Chandogya Upanishad we find that mind is made up of food (annamaya): “Food when eaten becomes divided in three ways. That which is the gross ingredient turns into feces. That which is the medium constituent becomes flesh. That which is subtlest becomes mind.” (VI.v.1.) It follows from the scriptural texts that the mind is nourished by the food. Therefore mind must be surely made up of matter and hence unreal.

Illusoriness of the world through logical reasoning

Everything made up of the five elements (pa~ncha  bhUta), including space, is unreal in the present, since it is nonexistent in the beginning and at the end (dissolution of the Universe). This is known from the shAstra only: “that which does not exist in the beginning and the end is equally so in the present” (mAndUkya kArika II.6), like mirage, rope-snake, shell-silver etc.  A mere change in the name, form and purpose does not make an effect substantially different from its cause, because cause pervades the effect [examples: cloth and thread, mat and grass].

It is well understood that a pot is made from clay and has clay pervading it. Similarly an actor dons different roles but in and through he is aware of his own self identity. The theories of causation – asat kArya vAda propounded by the Vaisheshikas and sat kArya vAda put forward by the sAMkhya-s (according to which the effect is already existent in the cause before production) – have been refuted in greater detail by Sri Shankara in his commentary on Brahmasutra. If the effect is totally non-existent like a sky-flower, it can never be born.  On the other hand, if the effect is already existent as per the sAMkhya theory, it is meaningless to say that an effect is born, for there can no birth for what is an ever existent thing like Atman at all times.

Nor does Vedanta accept pradhAna of sAMkhya theory as the independent cause of the world, since it is inert in nature. The Jaina theory that an entity can be both existent and nonexistent is also refuted, since such contradictory characteristics can never be associated simultaneously with the same thing, just like cold and heat cannot both be present in a body. Thus it is established on the strength of Scriptures and logic that the world consisting of mind etc is unreal, and the non-dual Brahman alone is real.

Brihadaranyaka Upanishad (II.v.19) states: “That Brahman is without anterior or posterior, without interior or exterior. This self, the perceiver of everything is Brahman…” This means that Brahman is neither the cause nor the effect as such. The scriptural declaration is that it is pure intelligence. Hence all other things are unreal. One should ascertain “I am always that Supreme Brahman”. Ascertain that immutable Brahman as devoid of all attributes as shown in the same Upanishad referred to above (III.viii.8): “It is neither gross nor minute, neither short or long, neither red color nor oiliness, neither the shadow nor the darkness, neither air nor ether, unattached, neither savour nor the odour; without eyes or ears, without vocal organ or mind, non-luminous, without vital force or mouth and neither does it eat nor is eaten by anybody”. Sri Shankara in his bhAShya comments: “In other words, it is devoid of all attributes, for it is one only without a second. So what can be specified and through what?”

Knowledge of the Supreme Brahman is liberation and attained here and now. Give up the false impression that the body is the self. The experience of day and night in our lives does not affect the ever shining, luminous Sun in any way. Bondage is due to the ignorance of the self, and knowledge of the self leads to liberation. Statements such as “all this is but the self” (Ch Up VII. xxv.2.), “there is no difference whatever in it.” (Br Up IV.iv.9) etc rule out any duality in the self. The world of duality that is perceived is only apparent and not real, and this results from ignorance (avidyA).

Brahman is the witness of all activity pertaining to movable and immovable things, body and mind. Vedanta accepts the duality for transactions in the world at the vyAvahArika level only and from the stand point of Brahma it is unreal, just like a pool of water in a mirage which is only illusory. Thus it is asserted through the scriptures and reasoning that the entire name and form of the Universe is a superimposition on Brahman. Thou art that (Ch. Up. VI. viii.7) is the import of the entire text shrutisAra samuddharaNam as written by SriTotakacharya. Advaitam – there is only Brahman.