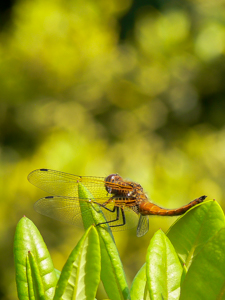 I occasionally get asked questions about reincarnation, in respect of advaita. And the sort of answer that I usually give is along the lines of saying that who-we-really-are was not born and neither will it die. Accordingly, it is really a waste of time to worry about if, why and how, the unenlightened jIva navigates through saMsAra.

But there is a whole section in the Brahma Sutra  dealing with this somewhat abstruse, and seemingly ultimately irrelevant topic. It has some interest, and raises a few questions. So, for those who feel that they are doomed to return for at least another lifetime, here are some details about what the scriptures say is involved.

In the past, I had always assumed that the nature of the body into which a jIva is born in any given life is determined sometime between the events of procreation and birth. Not so! A rudimentary, ‘minute body’ is actually allocated at the time of the death of the previous body (according to the scriptures). This new gross body, along with the subtle and causal bodies, life forces (prANa-s), mind, sense organs and organs of action (j~nAnendriya-s and karmendriya-s), together with the accumulated saMskAra, then ‘travel’ (gati) to the next birth. Consciousness or chit does not travel, of course, since it already exists everywhere!

The process that the jIva has to go through in between lifetimes is described in the Chandogya Upanishad V.3 – V.10 and the Brihadaranyaka Upanishad VI.2 and is referred to as the ‘five (mystic or sacred) fires’ (pa~nchAgni). The idea here is that this ‘minute body’ is in a very preliminary state only. You might imagine it as being like a figurine made out of clay and it has to go through various stages of priming and baking before it is ready to be born as a new human being. It should be noted, however, that ‘fire’ should not be taken literally here – this refers rather to the ‘sacrifice’ performed metaphorically as part of a traditional ritual or contemplation. But it is appropriate to imagine that heat is required for the ‘ripening’ process, just as fruit requires heat or a baby requires the warmth of a womb or an incubator. In fact, the word agni could be translated as ‘location’. As Swami Paramarthananda puts it, the overall process can be thought of as an assembly line along which the jIva passes, having bits added at each stage until it finally emerges from the mother’s womb as a completed, physical body.

The relevant section of the Chandogya Upanishad begins with the student, Svetaketu, who has supposedly been extremely well educated by his father, the Sage Uddalaka (referred to as Gautama, son of Aruna in the Brihadaranyaka version). He visits the King, Jaivalli, who assumes that he knows everything and asks him some questions about what happens after death, in particular where people go when they die and where they come from when they are born. Svetaketu returns to his father and complains that this was omitted from his schooling and the father confesses that he does not know the answers either and goes himself to the King to find out. And eventually the King, who belongs to the warrior class (kShatriya) agrees to transmit this secret teaching to Uddalaka, who is a Brahmin.

Jaivalli describes the five ‘locations’ or stages through which the jIva has to pass as follows (translation by Swami Madhavananda):

That world (heaven), O Gautama, is fire, the sun is its fuel, the rays its smoke, the day its flame, the four quarters its cinder, and the intermediate quarters its sparks. In this fire the gods offer faith (liquid oblations in subtle form). Out of that offering King Moon is born (the body is made in the moon for a sacrifice).

Parjanya (the God of rain), O Gautama, is fire, the year is its fuel, the clouds its smoke, lightning its flame, thunder its cinder, and the rumblings its sparks. In this fire the gods offer King Moon. Out of that offering rays produced.

This world, O Gautama, is fire, the Earth is its fuel, fire its smoke, the night its flame, the moon its cinder, and stars its sparks. In this fire the gods offer rain. Out of that offering food is produced.

Man, O Gautama, is fire, the open mouth is its fuel, the vital force its smoke, speech its flame, the eye its cinder, and the ear its sparks. In this fire the gods offer food. Out of that offering the seed is produced.

Woman, O Gautama, is fire. In this fire the gods offer the seed. Out of that offering a man is born. He lives as long as he is destined to live. Then, when he dies…

And here, if you needed it, as an example of just how impenetrable some of the Upanishadic scriptures can be and how necessary it is that you should have a teacher who understands them to explain what they are talking about. In the version from which these translations are taken, Shankara himself provide commentary on these verses.

Even so, it is difficult to appreciate that what these verses are speaking about is the mechanism of reincarnation, the stages through which the jIva travels in its journey from one body to the next. It is in his commentary on the 13th verse which comes closest to clarifying what is being spoken of:

Thus water (liquids), designated as ‘faith’, being successively offered in the fires of heaven, rain god, this world, man and woman, in the increasingly grosser forms of faith, mood, rain, food and seed respectively, produce what we call man. The fourth question (i.e. of the questions asked by King Jaivalli), ‘Do you know after how many oblations are offered water rises up possessed of a human voice and speaks?’ As being thus answered, viz that when the fifth oblation is offered in the fire of woman, water, transformed into the seed, becomes possessed of a human voice. He, that man, born in this order, lives.

Other scriptures (for example the Gita) speak of two paths which may be taken after death. There is the ‘way of the fathers or manes (souls of the departed)’. This is called pitRRiyAna or dakShiNa mArga, or the ‘Southern Path’, the ‘smoky’ or ‘cloudy’ path. The south is the symbol for saMsAra and one following this route is certain of rebirth, even after a stay in heaven to enjoy the fruit of their good karma. And then there is the ‘way of the Gods’, devayAna or uttara marga, the ‘Northern Path’ – this is symbolic of mokSha and there is no return; it is also called the ‘bright path’ or ‘path of the sun’. Those who follow this path go to heaven where they gain Self-knowledge gradually (krama mukti). There is also a third path for those not meriting either of the first two – jIva-s following this route return as animals. Of course, those who realize the Self in this life do not go anywhere – they already know themselves to be Brahman.

In the second part, I will write more about the meaning of pa~nchAgni vidyA, how it may be interpreted and the problems that are raised. I found that, if you look into it more closely, some of it actually begins to make sense! (A bit like poetry, in fact…)