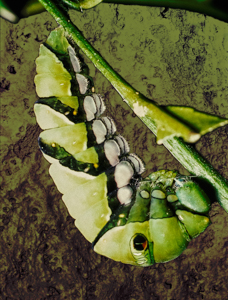 (Continued from – ‘Between Lives’)

To summarize then, the stages through which the jIva is said to go after death, and leading up to the next birth are as follows:

The ‘minute physical body’ mentioned in Part 1 as being ‘assigned’ to the jIva at death, is given the name ‘water’ (Apa or jala), although all of the other elements are also present of course. (Perhaps this is in recognition of the fact that the body is mostly water…)  Swami Paramarthananda points out that it might be thought of as like DNA, where all of the information about the body-to-be, from color of hair to propensity for certain diseases, is all contained in the ‘minute physical’ helical molecule. This, of course,  is quite contradictory to modern science, which claims that the nature of the new body is defined by combining the characteristics of the male and female parent

DNA. The pa~nchAgni vidyA says that the new body is determined by those portions of saMchita and AgAmin saMskAra fructifying to be the prArabdha saMskAra for the new life. The new father and mother have nothing to do with it. Accordingly, whether a baby is born with deformities, for example, is governed by the past karma of the jIva – the parents are not to blame.

Another incidental but interesting corollary is that the jIva does not suddenly appear at a certain number of months into the pregnancy – it is there already in the semen of the father (and even in the food that he ate). Accordingly, the question of whether or when abortion might be morally acceptable does not arise.  Birth is in accord with karma and abortion is therefore considered to be a great sin.

The process begins, then, when the jIva, together with its new minute body called jala, enters heaven. There, it gets ‘cooked’ and converted into soma. This is referred to (confusingly and mystically) as ‘moon’ or ‘food for the gods’ but this must not be taken literally! It is simply (!) the next stage in the evolutionary transformation from the ‘minute body’ to the next actual gross body produced at birth. The word anna, normally translated as ‘food’, effectively means ‘under the control of’ the gods. These are jIva-s who did not attain enlightenment in their last life and they are treated as servants or

beasts by the gods. It is the gods who are officiating over the ‘sacrifice’. The word vidyA in pa~nchAgni vidyA does not mean ‘knowledge’ but rather equates to upAsana, in the sense of ‘meditation’.

One of the interesting questions that this whole process throws up relates to the transition between the third and fourth states. Food, produced as a result of the third fire is in the form of vegetables apparently. These are eaten by the man and the migrating jIva gets transferred to the semen. But the food could equally be eaten by an animal or simply rot in the ground. This might be said to justify the claim made elsewhere in the Upanishads that it is ‘exceedingly difficult’ to gain birth as a human being! Of course, prior to this, the jIva has somehow to find its way via rain into the ground in order to aid the growth of the vegetable. Given that by far the most rain falls on the sea or in places where there are no vegetable seeds, this is also a very low-probability process!

But it seems that, against this, one has to acknowledge the doctrine that rebirth occurs

according to the prArabdha destined for the next life. Clearly, if one’s karma dictates that one has to be born into a Brahmin family, for example, so as to have favorable conditions for continuing one’s study of advaita, then it simply would not do to be eaten by simply anyone (or anything). Shankara argues that the residual karma (after using up most of the puNya karma in heaven) ensures that the process is not entirely accidental. But this seems to be struggling to justify an already decided conclusion.

Another point to be noted here is that the ‘guest’ or travelling jIva, in its travels, has to ‘share bodies’ with other jIva-s. Shankara goes to some lengths to explain how there is no interaction between the host jIva and travelling jIva. For example, when the vegetable is eaten, the eater jIva is simply eating food for nourishment. He or it is unaware that the vegetable, in addition to having its own ‘resident’ jIva, is host for a travelling jIva! But the travelling jIva is not affected by its host. It does not share in the fruits of action of its host, nor does it gather any new saMskAra or experience the results of any past karma. (So, for example, it neither enjoys nor is repulsed by the

One assumes that there was some difficulty for commentators in attempting to reconcile the ancient words of the Vedas with the more coherent and consistent theories of karma developed later. The fact that there is an entire pAda of the Brahma Sutras devoted to this (III.1) seems to bear this out. Wilhelm Halfbass, in his essay Karma, Apurva and “Natural Causes”, says that: “these ancient Upanishadic schemes appear as curious epiphenomena or as fossilized relics in a universe now thoroughly governed by karmic causality”. (Karma and Rebirth in Classical Indian Traditions edited by Wendy Doniger O’Flaherty)

The value of the entire concept could be seen in its enabling us to see behind the scenes, as it were, into the interconnectedness of all things. No entity is independent. Oxygen, water etc. are all necessary to life. Without the sun and air, there would be no wind; no wind, no rain; without the rain, no vegetation; no vegetation, no food, no living beings. All is part of the causal nexus leading to human beings. The whole process is

worthy of meditation. As Swami Krishnananda puts it: “The pa~nchAgni vidyA is a meditation; it is not an outward ritualistic sacrifice; it is a contemplation by the mind in which it harnesses every aspect of its force for the purpose of envisaging the reality that is transcendent to the visible part of this inner sacrifice.” and “There is, thus, in the end, no such thing as a local event in this world. Every event is a universal event. So is the case with the birth of even a human individual. Every birth is a point of universal pressure.” This might be considered as anticipating, perhaps, the ‘Butterfly Effect’ and Chaos Theory – sarvaM khalvidam brahma.

In the end, one has to remember that karma itself, together with any associated theories, is an explanation to satisfy (or not) the mind of the jIva still attached to the world and believing in its independent reality. Ultimately it proves to be just as mithyA as the world and the jIva themselves. When it is known that no one acts, there is no need for the theory. Self-ignorance, mAyA, world, jIva, karma etc. all arise together and disappear together.

[Note that all of the above is my own understanding gleaned from just a few sources. It is quite possible that I have misunderstood some key point and possibly offended some knowledgeable Hindu ritualists. If this is so, I apologize profusely – if anyone emails corrections to me, I will ensure that these are incorporated.]