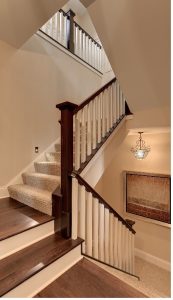 Narada climbs up the staircase from Name up to Spirit almost hopping and jumping spurred by his own enthusiasm and curiosity.   He asks his venerable teacher at each step after meditating, “What’s next?”  He, however, falls absolutely silent after meditation at the level of Spirit, the 15th itself. He has another flight of steps to take to reach the Ultimate, the Absolute!

Swami Krishnananda of the Divine Life Society tells us that the 7th chapter of the Upanishad expounds the magnificent doctrine of the bhuma, the Absolute, the plenum of Being, the fullness of Reality. But also cautions us that “As we go further and further in this chapter, we will find it is more and more difficult to understand the intention of the Upanishad. The instructions are very cryptic in their language. Even the Sanskrit language that is used is very archaic, giving way to various types of interpretations.” Though the words may look familiar, their meaning is significantly different and connote a much deeper sense.

For example, dhyAna, the name given to the sixth step, would also subsume within it the qualities of total focus, being fully absorbed paying imperturbable attention to the object of contemplation. The next Step ‘vijnAnam,’ which is superior to the focused attention, includes within it complete intuitive understanding. The step after that, viz., ‘balam’ (Strength), is the union of the power of the psyche with the power of the body, the union of consciousness with its object.

Likewise, the Step prANa (Spirit) is much more than what we know as the life-force within us. It stands for the invisible motive power of the entire universe. Swami Krishnananda says, “Nobody can understand what life is. We utter the word ‘life’ many times, but we cannot explain what it means. It is not what we do daily that is called life. Though we generally identify life with our activity, it is a mistake that we commit. Life is something inscrutable. Life is really what we are. …  It is a mystery that is operating in all names and forms. Whoever understands this mystery as the all-comprehensive Reality is called in this Upanishad as ativAdi, a specific term here indicating one who possesses surpassing knowledge and whose utterances are surpassingly true.”

Narada, having reached the level of Spirit, “keeps quiet, his mouth is hushed and his mind has stopped thinking. He does not know what to speak.” Noticing his condition, Sanatkumara himself starts pursuing the subject further without being accosted by Narada. Sanatkumara guides Narada on the next flight of stairs that are:

” ‘Happiness is plenum, Happiness is completeness, Happiness is the totality, Hhappiness is in the Absolute,’ declares the great master Sanatkumara. The term ‘bhuma’ used in this Upanishad is a novel word of its own kind which cannot be easily translated. It has a pregnant significance within itself which implies absoluteness in quantity as well as in quality, an uncontaminated character, permanency of every type, immortality, infinity and eternity. All these ideas are embedded in the very concept of what the Upanishad calls ‘bhuma’. Well, we can translate it in no other way than to call it the Absolute Being. The brahman of all the Upanishads is the same as the bhuma mentioned here in this chAndogya Upanishad. That alone is Happiness.”

Finally, the Upanishad blesses the seeker with an assurance:

Shankara adds a helpful note in his commentary at this mantra about the need and the importance of maintaining absolute purity of all that we consume through our five senses. Swami Krishnananda explains: “We must see purity, hear purity, touch purity, think purity, and sense purity. And what is purity? Purity is that which is compatible with the nature of the Absolute. Whenever we cognize a thing, perceive a thing, that thing should, from the point of view of our cognition or perception, be capable of being harmonized with the Absolute. We should not be Incompatible with nature. That thing alone is purity, and when that purity arises in the mind, there will be that capacity of concentration of mind which retains the consciousness of the bhuma. That is the perpetual retention of memory, the smriti which this mantra mentions. We can never forget the Being, the Absolute in our own Being. Then all granthi-s, the knots of the heart, get broken. The knots of the heart are avidya, kAma and karma —ignorance, movement of the mind with a desire, and activity towards the fulfilment of desire. They are the psychological knots by which we are tethered to earthly experience. They break immediately, and we enter into the ocean of Being. ”