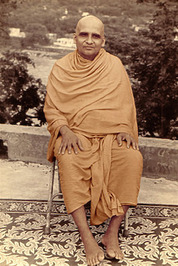 Existence is the minimum to which things can be reduced, without which even thought is impossible. Everything relates to existence of some kind, and there is no thought of non-existence. To argue along the lines of Parmenides, existence is that which does not admit of any change. We cannot think what is not, for what is not cannot come into being, either from what is or from what is not.

The concept of dimension, again, is possible only when there is spatial separation of one thing from another. But even space is included in what is. So what is cannot be diminished in any way. And it cannot be increased, because we cannot add anything to it other than itself.

Existence is the whole reality. It does not admit of either addition or subtraction, production or change of any kind. In order that it may move or change, there should be space; but space is not outside it. True being has no origination, no change, and so no end. This being must be equally present everywhere, with no less or more of it anywhere. It is that which is.

As being is indivisible, it cannot conceive of a real distinction of things in it. All things are being. If there are things other than being, they must be non-being. Even becoming has meaning only when it has being. If being is to be divided, we may have to introduce some other distinguishable and distinguishing element in it, which would be nothing but non-being.

from The Philosophy of Life by Swami Krishnananda, The Divine Life Society.