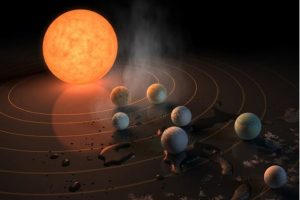 Paula Marvelly is a Web-designer, playwright and author in search of the Ultimate Truth for over two decades. As a seeker, she carved out a unique path for herself interviewing over fifteen living Advaita teachers from India, Europe and USA and studying the lives of over twenty enlightened women. Her two books published in 2003 and 2005 received rave reviews.  Paula’s books are:

Paula now maintains a Web Magazine The Culturium which explores the interface between spirituality and the cultural arts.

1.  How does Quantum Physics or modern Physics in general relate to Vedanta in answering the question about universe?

At one time or other, all sensitive people start inquiring about the nature of things introspectively. During ancient times in India, the questions were ‘Who am I?’ and ‘What is this world around me?’ etc. Trained by our Western education, we are habituated to look to the world outside of us first. The order of the questioning is thus changed when asking about the world first and then later about ‘me’. But it does not matter in which order the questions are raised.

The ancient Indian sages deflected these questions to investigate the reason for sorrow and misery in the world. Because, in the final analysis, they felt that if one were to be perpetually happy, no questions would have ever been asked. The root cause for any questioning was identified to be sorrow and so they went about finding an answer to resolve the sorrow. They realized that any amount of external examination would not eradicate sorrow and lead one to eternal happiness.

So they exhorted that we first should know what or who we are. If one pursues this inquiry rigorously to know what or who we are, we arrive at a surprisingly counterintuitive finding that there is ‘nothing’ at all! This realization is considered to be Knowledge with a capital letter. All other knowledge gained through experience, learning, experiment, thinking, etc., is accumulative, memory based and makes one a scholar and expert. It does not help, however, in the amelioration of sorrow. Knowledge with a capital K is known as True Self-Knowledge. One who understands this, internalizes it and ceaselessly is in that Knowledge is called the Knower of Self, or Atmavit. The Chandogya Upanishad says, ‘Tarati sokam Atmavit’ (Ch. Up. (7.1.3)),  ‘A Knower of Self transcends sorrow.’

Commenting on the fourth sutra, tattu samanvayAt, of the Brahma Sutra-s, in the first pAda of the first adhyAya, Shankara says that the most common import of all the Upanishads is to establish that ‘realization of Oneness of Self and Brahman is the highest human goal’. He further says that this realization becomes an accomplished fact when there is a total ‘eradication of sorrow’. Saving oneself from death and sorrow of the world, thus, happen to be the prime motivator for Self-Enquiry in several of the ancient Indian texts, for example the Vivekachudamani (verses 36-40).

So the ancient sages did not pay much attention to the issues of the external world or the formulae governing various components within it.

It looks to me that the predominant motivational factor differs in answering the fundamental questions of ‘what is this world around me’ and ‘who am I?’ in science and Advaita.

We are well aware that when we talk of the universe, our findings pertain to a minuscule portion of the entire universe – hardly four percent of it responds to electromagnetic waves, for example. There is an enormous amount of universe about which we hardly know anything at the present time. But the very fact that we know that so much universe remains unintelligible to us itself is an amazing achievement of science.

Basic scientific research is taken up, more often than not, in order to understand the nature and natural processes with a sense of wonder. Redemption of sorrow is a by-product in science. For religion, the prime driver is redemption of sorrow.

We may say in the end, saving oneself from death and sorrow of the world is the common theme in religion and science.

All of this is okay, but how come we still come across some intriguing questions regarding determinism and Classical Physics, or probability and Quantum Physics? Is the world really bifurcated in that way – with some things obeying Newtonian laws and others Quantum laws?

To answer such questions, we should probe them at a more fundamental level rather than being lost in what is observed or seen. What is observed may be deterministic or probabilistic, a wave or a particle, local effects or distant quantum entanglement, so let us not worry with the observation and the names we ascribe to what is observed.

Some clever guys even create new words and phrases when they are lost to explain certain dualities observed by them; then they go in search of those entities, which they created through their sheer imagination. Because they failed to know whether an electron is a wave or a particle, some create a new word ‘wavicle’ and believe a wavicle exists with dual form, each form superimposed on the other. But what would happen if you search for a wavicle? Can you ever find one? It is much better to admit that we don’t really know what an electron is ontologically.

This will bring us to appreciate that our knowledge and thought processes – or the mind in one word – are inadequate to really understand the nature of things. But mind is the only tool we have at our disposal. And therefore, we had better examine the mind first and know its limitations, rather than being lost in a byzantine labyrinth of concepts, formulas, their contradictions and reconciliations and so on, the stories that the mind creates.

2.  Then another set of physical laws was established called Quantum Physics. Why was that so and how are these laws different from Newtonian Physics?

As the physicists moved from large sized bodies to very small size entities, like atoms and subatomic particles, in their research studies, the inadequacies of Newtonian Physics became apparent. In addition, it was also discovered at that time that a hot body did not lose its heat energy by radiation according to any known formula. The heat energy seemed to be radiated in fixed amounts of packets. Each packet of energy is called a quantum.

In a broad sense, the physical laws developed around this ‘quantum’, together with the laws governing the physics of small particles like atoms and subatomic particles, constitute Quantum Physics. A surprising thing found with these laws is that they are not deterministic. We can at best give only a probabilistic estimate of an outcome – whether we talk of the position or path or speed of movement of an energy packet or a particle.

It is a very uncomfortable situation for man not to be sure of things. Einstein didn’t like it and some physicists even today like Nobel Laureate Dr. Legget do not like it in its current form.

From the moment we wake up in the morning until we retire to bed again, all our movements and actions are based on an implicit assumption we make but are not at all aware of. The assumption is my toothbrush is still there in the bathroom across the hallway where I left it last night, the road to the office and the office itself are exactly as I know them to be.

I take it for granted that space and time are absolute, and I function within this unchanging framework. Newton too developed his physics of bodies based on this assumption. He calculated the motions of heavenly bodies and their mutually attractive forces, assuming that they move in a rigid frame of space and an irreversible time axis. He also discovered that there was an instantly operating attractive force between two bodies. He called it gravity. He regretted his inability to understand how gravity is produced.

The physical laws thus developed gave us an immense confidence to determine the position of a body after the lapse of a given amount of time if we knew the initial conditions. We could trace the path of its movement and position at any time and other parameters like its speed, direction of movement, etc. This led us to think that all processes in nature are quite deterministic and some physicists arrogated themselves to declare that if we specify certain parameters, they can determine the outcome at any future date. This basic determinism underlies Newtonian Physics.

The important point we may note is that people like to be sure of what they have to face in the world. We would like to avoid the problem of ‘uncertain futures’, which is a characteristic of the real world in order to save our life and limb. So we automatically fall for the deterministic systems. Consequently, Newtonian Physics satisfactorily held the ground for over two and half centuries.

(To Continue … Part –  2: Origin of the Universe and What was there before the Big Bang)

Image at Top Left:  The TRAPPIST-1 star, an ultra-cool dwarf, has seven Earth-size planets orbiting it. [Three of them may have life!]

This artist’s concept appeared on the cover of the journal Nature on February 23, 2017.