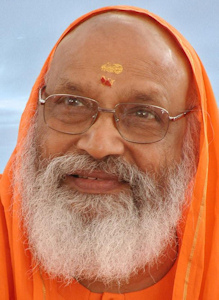 In case anyone has not yet heard, Swami Dayananda passed away yesterday, the 23rd September, at 22.18 IST in Rishikesh. Unquestionably the greatest teacher of Advaita in our lifetimes, he must certainly rank as one of the most important ever. Fortunately the legacy of his own writings and transcriptions, and that of the institutions he founded and the teachers he taught, will live on to the benefit of future seekers.

As a topical example of his teaching, I would like to reproduce the following pieces on the subject of manonAsha. These are extracted from the excellent book already recommended in these pages: ‘Pujya Swami Dayananda Saraswati – his uniqueness in the vedanta sampradaya’ by D. Venugopal.

There is also a widespread contention among the adherents of aShTANga-yoga that the truth of the self is covered by vRRittis (thought-forms) and it has to be uncovered by stoppage of thoughts (citta-vRRitti-nirodha). Pujya Swamiji clarifies that thought is not the problem. He says:

“The confusion comes from the statement that AtmA is undivided (nirvikalpa). The vision of the ShAstra is that while the knower, known, and knowledge are not separate from AtmA, AtmA is independent of all of them. In MANDukya UpaniShad and in the kArikA, the dreamer is cited as proof that there is no real division (vikalpa) such as dreamer, dream and dreamt, even though during the dream, the division was taken to be real.

The purpose of the dream example is to make us see that the waker’s experience of duality is not any different. In the jyotir-brAhmaNam of the bRRihadAraNyaka UpaniShad (4.3. 1-6), the invariable AtmA in dream and waking is presented as the light of awareness (jyotissvarUpaH). It is obvious that AtmA is always nirvikalpa, in spite of the apparent division. That is what is said in Kena UpaniShad, ‘in every form of knowledge, AtmA is understood by the discriminative as the invariable’ (2.4). Therefore, the knowledge is that I am thoughtfree (nirvikalpa) in spite of the experience of vikalpa. This is entirely different from a state wherein there is absence of thoughts.”

“In aShTANga yoga, the aNgI (the main thing to be achieved) is nirvikalpa-samAdhi, a state wherein there is the absence of subject-object relationship. Even though it is a desirable accomplishment, the state itself is jada (inert) inasmuch as there is no thought (vRRitti) that can destory ignorance. In samAdhi (a mental state of absorption) and also when there are thoughts, what obtains as invariable is the svarUpa of AtmA, which is nirvikalpa. Again, the notion that when there is no more thought, then there is enlightenment implies a duality such as AtmA and thought; when thought is, AtmA is not; when AtmA is, thought is not. Both become equally real because one exists in the absence of the other. But that is not true. Does thought deny AtmA? Is there a thinker without AtmA? Is there a thought without AtmA? In fact, thought is AtmA. But AtmA is not just a thought. AtmA is satyam, being present in all situations. The situations are mithyA, dependent as they are for their existence upon AtmA.”

“Thoughts are natural and they will always return. So, you have to do nirodha all the time to see AtmA. Even if you see AtmA in samAdhi, AtmA becomes objectified and is reduced to the level of any other object in the creation. If AtmA is the object, who is the subject? Assuming you see AtmA in samAdhi, can there be fulfillment in terms of knowledge or of fullness? You continue to be a saMsArI. According to this, if you settle for AtmA, you miss the world and vice versa. So, a yogi is always tense, afraid of the world.”

“Elimination of thoughts is not knowledge; it is not self-discovery. Thoughts do not cover AtmA. Thoughts come, I am. Thoughts go, I am. Compare this with: snake is, rope is; snake is not, rope is. So, there is the mistake of equating thoughts (which come and go) with I (which is always there). If I do not know who I am, this original mistake is never corrected by removing the thoughts. VedAnta does not accept thoughts as the cause for sorrow. The mistake of taking thoughts for AtmA is the cause of sorrow. This is entirely different from what the modern VedAnta and Yoga say.”

“Sorrow is a result of a mix up between the real and the apparent. A wave is not separate from or independent of water while water does not depend upon the wave. So too a thought is not independent of AtmA, I, awareness, while AtmA is independent. The mistake of taking the thought as AtmA is obviously the cause of sorrow. Even if thought is a problem, the solution, ‘Get rid of the thoughts’ is wrong. The thought, ‘I am small’ is a problem. Mistaking the thought for I is the problem and the solution is the knowledge, ‘I am real, thoughts are apparent’.”

“The reality given to the mind is to be destroyed by knowing the invariable AtmA manifest in all thoughts. AtmA is not covered by thoughts. Wave does not cover water; in wave itself, we see water. The wave need not subside for us to see the water; in wave itself, we see water. There is no covering at all. AtmA cannot be covered by anything except by ignorance. It is always manifest. I am awareness, always free from thoughts, in spite of thinking. This is the darShana of the one self. What is real is always one, one alone is real. This knowledge destroys the old silly mind that stood against me. Thinking continues but it is known as mithyA, apparent and so, it is as good as nonexistent. One’s shadow is not a problem. MithyA is not a problem – it is useful; mind is useful and that is all there is to it.”