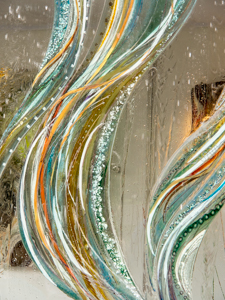 Enlightenment is the realization in the mind of a person that ‘I am Brahman’. So what is this ‘Brahman’ that I am supposed to realize? Knowing this must constitute a significant aspect of the Self-knowledge that I need to acquire in order to become enlightened.

(The following analysis is loosely based upon Swami Paramarthananda’s talks on Shankara’s bhAShya [analytical commentary] on the Brahma Sutra.)

Before we can investigate anything, two criteria must be satisfied:

2) We must have an appropriate means of acquiring data (a pramANa).

For example, if someone asks: ‘Is my car outside?’, in order to be able to answer (assuming we can understand the language), we must know first know what a car is! Then, it is necessary to know something distinctive about the car, such as its make, color etc. even if not its registration number. And we must be able to acquire this information, i.e. we must be able to see (i.e. not be blind) or at least be able to ask someone else and hear their reply.

So, when the Brahma Sutra announces at the outset: athAto brahma jij~nAsA [thereafter begins an enquiry into Brahman], we cannot do anything unless we know what it is, into which we are to enquire.

What is the essential ‘definition’ of Brahman? Well, it helps to understand this if we know something about grammar and Sanskrit (although not necessarily Sanskrit grammar you will probably be pleased to hear!).

If you know the difference between an adjective and a noun, you will know that an adjective usually qualifies a noun – it tells you more about it so that you can differentiate it. Thus, for example, I might ask you to bring me the book from next door and, when you look, you see that the room next door is actually a library. So, if I cannot give you the title or tell you the precise location of the book, I might say that I am referring to the small, thin, red, hardback book with the coffee stain on the front cover. Now, you are almost certainly in possession of sufficient information to be able to find the book, even if it might take you some time, depending upon the size of the library. Each of the words: small, thin, red, hardback and the phrase ‘with the coffee stain on the front cover’ is functioning as an adjective, qualifying the noun ‘book’ or telling you more about it.

‘Qualify’ in this context means ‘attribute a specified quality to something’. Although the OED says that this meaning is now archaic, it says precisely what we want to say. One of the other meanings is also relevant, in that use of adjectives in this way makes the specified object less general, tying it down to something more specific or limited.

So a noun is normally qualified by an adjective. But this is not always the case. If I ask you what you understand by a ‘big’ house, you will probably describe a mansion; something with many wings, bathrooms etc, such as might have been common amongst the upper classes in past centuries. If your own home happens to be in a shanty town on the outskirts of Rio or Mumbai, however, a ‘two-up, two-down’ terraced house might well seem to be big. If I ask you to think of a big fly, a common house fly is actually quite small compared to a hornet, say. And that is tiny compared to the goliath beetle from Costa Rica. If you know anything about particle physics, you will know that a proton is very big compared to an electron but the particle that was sought by the Large Hadron Collider experiments in Geneva is absolutely enormous, relatively speaking.

The purpose of this discussion is to point out that the massive hadron, big though it is for a sub-atomic particle, can scarcely be called big when we are talking about houses. Thus, in this analysis of what is meant by ‘big’, the adjective ‘big’ in each case is effectively being qualified by the noun. We cannot associate any specific concept of ‘bigness’ without taking into account the nature of the related noun.

And so we come finally to Brahman. The reason for all the preliminaries is that the word derives from the dhAtu (a Sanskrit ‘root’ word) ‘bRRiH‘ and it is effectively a noun derived from the adjective ‘big’. In essence it could be translated as ‘the Big’. Now, in the light of the above discussion, how can we interpret this? What we are saying is that there is no noun to put this ‘big’ into context. In other words, the ‘bigness’ is not qualified – by anything. It is ‘big’ without qualification or limitation of any kind; in other words ‘infinitely’ big.

Of course, the idea has to be subsumed in the reality. Brahman transcends all concepts, reconciles all opposites. Everything is mithyA only, deriving existence from Brahman, being simply name and form of Brahman. And so, having appreciated the thought behind the word, you should not dwell upon it. Sri Atmananda has this to say:

“The world, posited in space, is an appearance on the Reality. The term ‘world’ rightly comprehends also the generic space and time in which diversity is supposed to appear. The process of visualizing the Reality in the world is by completely separating the appearance part of it from the Reality. But usually, in that endeavor, the world alone is eliminated, leaving behind unnoticed both space and time tagged on to the Reality. The consequent superimposition of the sense of time and space, on the Reality behind, gives it the idea of bigness. This is responsible for the fallacious concept and name, ‘Brahman’. When this sense of bigness is also eliminated, Brahman itself stands revealed as the ultimate Reality, the ‘I’-principle.” (Notes on Spiritual Discourses of Shri Atmananda, taken by Nitya Tripta, Vol. 3, Non-Duality Press, 2009. ISBN 978-0-9563091-4-3. Buy from Amazon US, Buy from Amazon UK

We can only describe something that has attributes because the attributes are the aspects that we describe. If you are asked to describe an object, you do so by saying whether it is big or small, what color it is and so on. Swami Dayananda explains how all of this is relevant in respect of Brahman:

“The words can describe something that has one or more of these characteristics: jAti [species], guNa [attribute], kriyA [action] or sambandha [relation or connection]. For example, you can understand the word ‘cow’ because cow is a species. If you say ‘sweet orange’, sweetness is the attribute of the orange. Words like driver, cook, sprinter and so on make sense in terms of action. Similarly, you can understand words describing relationships like father, son, citizen etc. So the words can only describe an object possessing any one or more of these categories. But Brahman does not possess any of these categories. There is no second Brahman, so there is no jAti for it. Brahman does not have any attribute, so guNa is not possible. Again, Brahman does not undergo any change, so it cannot perform any action. Brahman has no connection with anything else because anything else is not there. So it cannot be revealed by any relationship. Therefore, Brahman cannot be revealed by any word that we use in our parlance.” [vivekachUDAmaNi – Talks on 108 Selected Verses, Swami Dayananda Saraswati, Sri Gangadharesvar Trust, 1997. No ISBN. You can buy this brilliant book from Arsha Vidya Gurukulam.]

In fact, the most frequently encountered ‘description’ associated with Brahman is ‘neti, neti’ – ‘not this; not this’, indicating that no object or concept can be considered to be Brahman. The phrase originates from the bRRihadAraNyaka upaniShad. Here is part of Shankara’s commentary on II.iii.6:

“How through these two terms ‘Not this, not this’ is it sought to describe the Truth of truth? By the elimination of all differences due to limiting adjuncts, the words refer to something that has no distinguishing mark such as name, or form, or action, or heterogeneity, or species, or qualities. Words denote things through one or other of these. But Brahman has none of these distinguishing marks. Hence It cannot be described as, ‘It is such and such,’ as we can describe a cow by saying, ‘There moves a white cow with horns.’ Brahman is described by means of name, form and action superimposed on It, in such terms as, ‘Knowledge, Bliss, Brahman’ (III. ix. 28), and ‘Pure, Intelligence’ (II. iv. 12), ‘Brahman,’ and ‘Atman.’ When, however, we wish to describe Its true nature, free from all differences due to limiting adjuncts, then it is an utter impossibility. Then there is only one way left, viz to describe It as ‘Not this, not this,’ by eliminating all possible specifications of It that have been known.

“These two negative particles are for conveying all-inclusiveness through repetition so as to eliminate every specification whatsoever that may occur to us. Such being the case, the doubt that Brahman has not been described is removed. If, on the other hand, the two negative particles merely eliminated just the two aspects of Brahman that are being discussed (viz the gross and subtle), then other aspects of It than these two would not be described, and there would still be a doubt as to what exactly Brahman is like. So that description of Brahman would be useless, for it would not satisfy one’s desire to know It. And the purpose of the sentence, ‘I will instruct you (about Brahman)’ (II. i. 15), would remain unfulfilled. But when through the elimination of all limiting adjuncts the desire to know about space, time and everything else (that is not Brahman) is removed, one realizes one’s identity with Brahman, the Truth of truth, which is homogeneous like a lump of salt, and which is Pure Intelligence without interior or exterior; his desire to know is completely satisfied, and his intellect is centred in the Self alone. Therefore the two negative particles in ‘Not this, not this’ are used in an all-inclusive sense.”

[The Brihadaranyaka Upanishad With the Commentary of Shankaracharya. translated by Swami Madhavananda, Advaita Ashrama 1965, ISBN 81-7505-102-7. (Buy from Amazon US, Buy from Amazon UK)