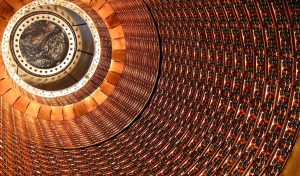 6.  Returning to the subject of the mind and the brain, what is gamma wave synchrony and how does it tie in with our view of the world?

You see, we are conscious of a world out there and we are also conscious that we are conscious. How does this happen? Where is the seat of consciousness? The ancient Indian sages postulated an invisible entity about the size of the digit of the thumb to be residing in the heart overseeing the bodily functions and also providing consciousness to a human being.

To the extent my knowledge goes, the ancient scriptures did not talk of neurons or equivalent units or the working of the brain. They did, however, talk of nerves. They conceived the nerves to be the conduits of not only the life-forces but also food and other material. They said that all these nerves join in the heart. The Western philosophers, however, use consciousness in a different way. They thought of a soul.  Perhaps it was Descartes who identified the pineal gland in the brain as representing the soul.

Modern day science discovered different frequencies of electromagnetic waves emanating out of the brain. The frequencies varied depending upon the activity state of the brain: one frequency when we are focused; another when we are in deep sleep; a third when we are fully awake and active. These frequencies and characteristics of the waves were markedly different in each condition. Essentially it looked like our brain operates in electromagnetic fields and these fields are related to consciousness. Particularly after the work of Francis Crick, researchers began to find some visible correlates for Consciousness.

One of the ideas presented is that when the neurons from different parts of the brain synchronously spike in their activity, we feel conscious of an object. Whether it is the case that the synchronous pulsing within the neurons engenders consciousness in our brain may or may not be so; however, the fact remains that the frequency of over 30 cycles per second em waves measured on the scalp do indicate consciousness.  This frequency is called the gamma frequency, its range being 30–90, usually around 40 cycles per second. If it is around 8–12, it is called alpha; 12–30 beta; 1–4 delta and so on.

So the cumulative frequency of the em field measured in an electroencephalogram (EEG) at about 40 Hz indicating synchronization from different lobes of the brain is gamma synchrony.

A study of the gamma synchrony is being pursued in modern neuroscience to see how it reflects meditative states of the brain and if there are any cognizable differences in a brain with long-term practice in meditation, like monks for example,  compared to unmeditating control subjects, for example, ordinary college students.

A more technical write up on gamma wave synchrony will be posted at my blog in May 2011: beyond-advaita.blogspot.com

7.  What about the recently discovered God particle? Perhaps this is evidence of an all-pervading entity in the universe?

It is again one of those classic examples of misleading journalism trying to popularize science. At one time, journalists talked about a God gene in the days when scientists were finding a gene for each character or disease a human being suffers from. That was just sensationalizing. The God particle is one such misnomer, though it was a physicist who started it thus.

When we talk of fundamental particles, we find that there are essentially two types of particles: one type are called fermions, that occupy space; and the other type are called bosons, which carry force. We know that each particle of matter that occupies space has a mass. And from Einstein’s famous equation, we know that mass is energy or a force, as it were. How does the particle get the force to give it a mass?  We do not know. So some physicists working on this problem suggested a fundamental particle that gives mass. Professor Higgs in the UK bet them all to get his name eponymously for this particle. Because it is connected to force, it is a boson type particle. It is known as Higg’s boson. The science journalists loved to call it the God particle.

Professor Haisch and his colleagues think that matter obtains mass because of resistance to movement from the invisible energy in space. That means solidity, or mass, for matter is not intrinsic. It is an illusion. Professor Haisch’s theory, however, did not get much acceptance. The ongoing experiments at the Large Hadron Collider are expected to throw light on the existence of Higg’s boson. An unconfirmed report says that in April 2011, the LHC scientists did see some evidence in one of their experiments. Let us await these results.

8.  But what about Superstring Theory? I thought it was the final, watertight theory explaining the nature of reality? Could you explain what it is?

There appear to be fundamentally four forces in nature – gravity, electromagnetism, the weak nuclear force and the strong nuclear force.  When we discussed the origin of the universe, we talked about the backward projection in time of the evolution of the universe using Einstein’s equations. Such a projection in the case of the four forces should also be possible, unifying them into a single force.

Physicists have been able to unify electric and magnetic forces into one – the electromagnetic force. From there it was relatively an easy step to join electromagnetism with the weak nuclear force – it was termed the electroweak force.  Then it took some time to unite it with the strong nuclear force. But to date, no way seems possible to be able to combine gravity with the rest of the three forces.  Gravity, though the weakest of them all, holds its independent position and defies to be melded with the rest, keeping its turf of influence to large sized bodies. When it comes to atomic and subatomic size particles, the known laws of gravity do not apply. This enigma of two distinct and disparate theories – one valid for large size bodies and the other to small particles – is an embarrassment to physics.

Because gravity is so weak, some physicists have proposed that there may be more than the usual three space plus one time dimension in the universe, and gravity may be a force coming from the extra dimensions. They imagined as many as seven dimensions to the universe. Those theorists were ridiculed and one scientist even lost his position as a professor at a respected university because of this view he held.

In the meanwhile, another set of physicists examined the inadequacies within the standard model proposed for the formation of matter, starting from quarks – particles smaller than electrons, protons, neutrons, etc. They suggested that what we perceive as solid matter might not be really solid at all. They visualized it as vibrations of ultra small strings. Just like the sounds of ‘do, re, mi, fa, so, la’ are produced by the vibration of a violin string, the subatomic particles are visualized as the produce of the vibrations of the ultra small strings that the physicists conceived of.

When they worked in this fashion, it was found that an ultra small particle that can be the fundamental particle for gravity could also be derived from the vibrations of the strings, just like the other particles of subatomic size. But the only problem was that the strings have to vibrate in as many as ten dimensions, in a way reviving the old concept of more than three space and one time dimensions. The biggest achievement of this thought process was that the physicists found a way to unify the four fundamental forces in nature using String Theory.

Now, physicists had to face another embarrassment – an embarrassment of too many. There are as many as five ways of deriving various particles in nature. This is far too much for the precision-minded physicists, who would like it to be a simple unique way of doing it. Edward Witten, who is considered the most brilliant living physicist, then came up with the idea of an umbrella theory holding the five different versions of string theories. It is called the M-Theory, the choice for the meaning of M being left to you – it can stand for Master, Mother, whatever you want. The only thing is that it needed ten of space and one of time dimensions, making all together eleven dimensions. It predicts the existence of super heavy particles corresponding to all the known fundamental particles.

The only comforting point for us in Superstring Theory is the basic assumption of ‘vibrations’ of the strings, producing the apparently solid matter just like sound is the result of a vibrating violin string. The Taittiriya Upanishad holds that the creation has come about by ‘vibration’. The mantra reads: ‘sah akamayata bahusyam prajayeya, …’ (6.1), ‘He, or It, thought, to become many, for creation.’  How? By vibration.

I would not bet that Superstring Theory is the ultimate theory to define the nature of reality. Over five years ago, I made some slides on the Science of Religion.  Whereas science was still trying to resurrect an all-pervading entity in the universe – once it had ether, now quintessence, cosmological constant, etc. – Indian philosophy has always been talking about an all-pervading Brahman.

So a real Theory of Everything has to be like ‘Tat’ of Vedanta.

(To Continue … Part 4:  Superimposition in Quantum Physics and Advaita and The Role of The Mind)