Part 6:  Effect of Meditation, jIvanmukta  and Science as pramANa: 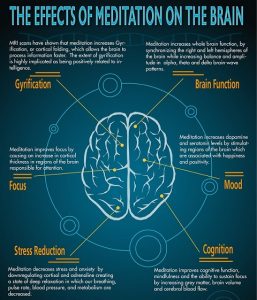 14.  What are the benefits of meditation on the mind?

As we understand, mind is what the brain does. But as Neuroscience found out, the pulsing of the neurons as the brain acts has a feed forward and feed backward effect. The em field produced by the activity of the neurons affects the brain. Consequently, what we do mentally has an effect on the brain.

In fact, our scriptures hold that what we do mentally is much more forceful and effective than physical performance. Manasa Puja, or silent worship within our mind, is held far superior to pompous and ostentatious prayers. The mental worship in a way is meditation. Even in athletics and other sports, the candidates are asked to rehearse first mentally the subtleties of every fine move before they perform physically. I learnt a lot of my driving more by thinking before I got into a driver’s seat in a car.

It is important to mention in this context that as per Advaita Vedanta, meditation is not something you ‘do’, but that’s what you ‘are’, a point Rupert Spira often makes.  This is an involved statement and for the present we shall skip it. We shall discuss ‘meditation’ in a more generic sense as normally understood to be something that you do for the purposes of this discussion.

Extensive scientific research is going on regarding the effects of different types of meditation on the brain. The general finding is that meditation has the same effect as exercise has on the muscle. Meditation changes not only the functioning but also the physical structure of the brain, in the same way in which music does. I had a short article on ‘Effect of Meditation on the Brain’ in the small book, Religion Demystified: Understanding Life’s Mysteries in terms of Latest Scientific Findings, 2008.

What psychologists and psychiatrists describe as cognitive behavioral therapy, and its variations, can be seen as a form of meditation. Sharon Begley published a book on how training your mind changes the brain in 2007. It is evident that our brain is not like a rigid printed-circuit board. It is highly placid with labile neuronal connections and genesis of new neurons. Andrew Newberg in his book, How God Changes Your Brain, in 2009, showed that, ‘Not only do prayer and spiritual practice reduce stress and anxiety, but just twelve minutes of meditation per day may slow down the aging process.’ He even goes to the extent of saying that, ‘Intense prayer and meditation permanently change numerous structures and functions in the brain, altering your values and the way you perceive reality.’ In effect, thinking itself has the capacity to change the brain and body, beyond the genetic blue print.

We have the case of a Buddhist diabetic monk who by sheer meditation for about a year could heal his gangrene affected rotting leg, which doctors advised him to get amputated to save his life!

Recent published scientific research findings suggest that meditation is useful in modulating pain, being stronger than even drugs; helps in rational, rather than emotional, decision-making process; boosts brain connectivity; enhances attention; reduces depression; provides continuous mental state of happiness; and so on.

15.  Can you explain the nature of the mind of a jivanmukta and its characteristics?

This is a simple but a very profound question that cannot be replied in a few sentences.

We have to first understand whom we refer to as a jivanmukta. Then there is the controversy raised by a few people who hold that a jivanmukta would not have a mind at all and hence there is no question of the nature of his/her mind.

The teachings of many of the modern day swamis too do not help; they only contribute to confound the problem.

Even if we talk of a jivanmukta as one who does not have a sense of a separate ‘self’, psychologists would want you to define which particular self – one that talks of an ID or that which gives embodiment, or one that locates him in space-time. These different ‘selves’ have different connotations in the activity of the brain.

Yogavaasishta is a scripture attributed to Sage Valmiki. We do not know who the real author was, but one thing appears to me clearly. The author, whoever he was, did not have any other agenda except bringing out clarity on Advaita Vedanta without any worry about social integration and re-establishment of an order, unlike some eighth century or later saints and acharyas. Yogavaasishta discusses the problem of the ‘mind’ of a jivanmukta extensively.

A jivanmukta, or one who is liberated right in this life, is an individual ‘in whom a separate sense of “self” has collapsed.’ His body may still be able to retain its natural awareness to orient itself in time and space – he will still catch a train at the fixed hour at a particular station – retain memory to reach back his home but he will not have the sense of ‘doership’ or agency of action – I am doing – or ‘ownership’ – this is my body. The body lacks the sense that it is observing something out there, separated from itself in space and time. Actions seem to happen to it. Life lives the body rather than he living a life.

Scriptures describe him as amanska, ‘without a mind’. This does not mean ‘mindless’ but the absence of the sort of mind we are familiar with – judging things with the polar pairs of words, having a self-protecting and self-preserving ‘me’ at the center.  A jivanmukta’s mind is described as free from all blemish. Such a mind is Consciousness itself, with maybe some extremely minor traces of past impressions remaining. Such a mind is compared to a burnt-out rope – the shape of the rope is retained but not its features of strength, tenacity to hold, etc.

16.  Finally, one could argue that Vedanta is a science of the mind, no more or less valid than science per se. Vedanta is, after all, only a means to an end, a pramana; it’s not the end in itself. Can science ever be a pramana, a means of knowledge?

Well, I would like to put before you three points:

One: the Cartesian Dichotomy – science for material things and philosophy for the mind – is an outdated view. The mind-matter continuity is being increasingly realized. Science is now investigating mind and Consciousness, re-examining the world more as a virtual entity rather than as a solid reality. Dr. B Whitworth, an Australian Physicist pointed out a couple of years ago the virtual reality of the world we are living in. Dr. J. Barbour, a theoretical Physicist talks of the illusory nature of time.  Their papers remind one of the statements in Vedanta.

Two: the method of science is not merely about ‘reductionism’ as some people seem to suggest. Science is also about the ‘big picture’ – old continental drift, now plate tectonics; discovery of virus-spreading pandemics in Indonesia, Africa etc.; the jump from DNA to the genome; the link from atom smashing to the origins of the universe; relating local perturbation to the theories of chaos and global complexity integrating systems and subsystems of modern-day Systems Biology; etc., etc. would never have happened. As you yourself are well aware, the demarcation of subject-object – observer is no more a remote entity, s/he is a participant in experiments – has vanished in Quantum Physics.

Three: Science is still a ‘developing Upanishad’. Every significant research paper is ‘breaking news’. The last word is not yet said. So have patience, continue with the ‘wonder of enquiry’, which is the True Spirit of Science, as Professor Feynman says it: ‘I wonder; I wonder why; I wonder why I wonder why.’