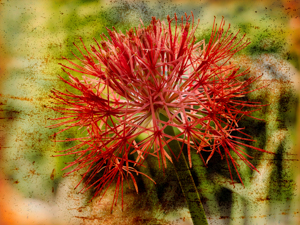 Here is how I described this teaching some years ago:

First of all, however, I will say a little about sRRiShTi dRRiShTi etc, since I have mentioned these above. I once thought that these were the principal creation theories of advaita. sRRiShTi is the Sanskrit word for creation. The mythical stories of God creating a world, for example over six days as in the Bible, are called krama sRRiShTi, meaning ‘gradual creation’ (krama means ‘ progressing step-by-step’). dRRiShTi is the Sanskrit word for ‘seeing’ or the faculty of sight. Thus, sRRiShTi dRRiShTi vAda means that a world is created and then we perceive it. dRRiShTi sRRiShTi vAda, on the other hand, supposes that perception precedes creation. This effectively boils down to a form of subjective idealism; i.e. the world only exists in our mind. This, in turn, implies that there are no other individuals than ourselves; i.e. solipsism. (The theory that there is only one person is called eka jIva vAda in Sanskrit.)

You will no doubt be familiar with the concept of mithyA and will know that the world does not exist as an entity in its own right but is entirely dependent upon brahman which is its essential substratum. This is analogous to our dream world having no existence of its own but being entirely dependent upon our mind, which is its essential substratum. So the theory of dRRiShTi sRRiShTi vAda should not sound so outlandish. Nevertheless, it was not recognized, or at least not spoken of, by Shankara and only appears relatively recently, for example in the transcriptions of Ramana Maharshi’s dialogues. The reason why Ramana might have considered it relevant is suggested by the following quotation: “If one can consistently regard the world as an unreal creation of the mind then it loses its attraction and it becomes easier to maintain an undistracted awareness of the ‘I’ thought.” (David Godman, ‘Be As You Are’) As will be seen, however, the idealistic view of creation is one which is held by the vij~nAna Buddhist and it is rejected in the brahmasUtra-s. [Not actually sure this is true but it is also rejected by Shankara in his commentary on Gaudapada’s kArikA 4.28 – note that the vij~nAna Buddhists also believe that Consciousness is ‘momentary’, being ‘born’ and ‘dying’ in each moment. I deal at length with all of this in ‘A-U-M’.]

As an interesting aside, the vij~nAna vAdi-s use the example of dream to support their theory. They say that, on awakening, the dream world is seen to be entirely a creation of the mind. In just the same way, the waking world also is unreal. Ironically, this is the same argument used by gauDapAda in the mANDUkya kArikA so it might initially seem odd that Shankara should refute it. However, says Shankara, they are failing to make a subtle but crucial distinction. The world does exist separate from the mind, even in the case of the j~nAnI. What it is not separate from, is Consciousness.

Shankara concedes in his commentary on Gaudapada’s kArikA-s that waking state and dream states are similar because both can be ‘objectified’ (dRRishyatvam). (The eka-jIva-vAdins translate this incorrectly as ‘seen’ or ‘perceived’.) In his Brahmasutra bhAShya (II.ii.29) he clarifies this when he states: “…it cannot be asserted by a man… that the perception of the waking state is false, merely on the ground that it is a perception like the perception in a dream. (And it is not logical for those who consider themselves intelligent to deny their own experience.)”

The eka-jIva-vAdins conflate the waking and dream states by their theory – both have to exist only in the (single) jIva’s mind. This again conflicts with traditional teaching, in which avasthA traya is a key prakriyA. And it does away with vyavahAra entirely – the empirical waking world becomes just as much prAtibhAsika as is the dream. Of course, by effectively making many aspects of traditional teaching redundant, and going ‘straight for the jugular’, it theoretically reduces the elapsed ‘seeking time’ by a vast amount. A bit like the ‘This is it’ of the neo-Advaitins… Although, of course, one must not lose sight of the (claimed) fact that there is only one jIva, who is thus inventing teacher, scripture, logic, reason, experience…

The one question that keeps coming to my mind in all of this is: who is the eka-jIva-vAda proponent trying to convince?? His teaching/writing has to be entirely for his own benefit, since there are no others. I am criticizing the teaching for my own benefit, since there is not really an ‘Advaita Vision’ site or any readers of material posted there. You, the reader, are the only jIva if you are reading this without my knowledge – are you trying to convince yourself of the value of the theory or its failure? Make up your mind!

Brahman is limitless. We could say that we limit it by saying that it cannot ‘do’ anything or ‘enjoy’ anything (akartA, abhoktA). So let us say that it ‘chooses’ to delude itself by posing as a jIva and imagining the creation, so that it can follow a path to remove its ignorance and realize that it has been Brahman all of the time. Since it is limitless, it must be able to do this.

But, since it is limitless, it can also pose as many jIva-s in a world that has a higher order of reality than a dream. And it can ‘enjoy’ the process of realizing its nature many times over as each jIva progresses down its own path. Since a world of many jIva’s clearly corresponds better with our experience, why should anyone even conceive that Brahman would limit itself to one?

Ramana Maharshi is often credited as a key source for teaching eka-jIva-vAda – indeed I have made this claim myself – but here is extract 571 from the ‘Talks With Sri Ramana Maharshi’ (7th Nov, 1938):

Multiplicity of individuals is a moot point with most persons. A jiva is only the light reflected on the ego. The person identifies himself with the ego and argues that there must be more like him. He is not easily convinced of the absurdity of his position. Does a man who sees many individuals in his dream persist in believing them to be real and enquire after them when he wakes up?

This argument does not convince the disputant.

Again, there is the moon. Let anyone look at her from any place at any time; she is the same moon. Everyone knows it. Now suppose that there are several receptacles of water reflecting the moon. The images are all different from one another and from the moon herself. If one of the receptacles falls to pieces, that reflection disappears. Its disappearance does not affect the real moon or the other reflections. It is similar with an individual attaining Liberation. He alone is liberated.

The sectarian of multiplicity makes this his argument against non-duality. “If the Self is single, if one man is liberated, that means that all souls are liberated. In practice it is not so. Therefore Advaita is not correct.”

The weakness in the argument is that the reflected light of the Self is mistaken for the original Light of the Self. The ego, the world and the individuals are all due to the person’s vasanas. When they perish, that person’s hallucinations disappear, that is to say one pitcher is broken and the relative reflection is at an end.

The fact is that the Self is never bound. There can therefore be no Release for It. All the troubles are for the ego only.

The reason I include this quotation, though, is not to claim that Ramana did not utilize eka-jIva-vAda in his teaching – I’m perfectly prepared to accept that he did. The point is that Advaita uses many prakriyA-s in its teaching. A good teacher uses whichever one is most suited for a given seeker, and most likely to move that seeker forward by eliminating some Self-ignorance.

All these devices are mithyA, just as are the guru and shiShya themselves. The thrust of my argument is that this particular teaching is an unnecessary and unhelpful extrapolation from the message of vAchArambhaNa shruti. It is an intellectual diversion that does not move the seeker forward but is likely to leave them stranded in a cul-de-sac or boost an ego into believing it is the only one.

Our experience is that we are separate individuals in a world of multiplicity. The traditional, scriptural teaching, explained by a qualified teacher, is more than enough to eliminate Self-ignorance. It is not helpful for a seeker to fall into the traps mentioned above; it would seem to be positively unhelpful for a teacher to lead the seeker into them.

In my research for sources on the topic of EJV, I have come across the claim on more than one occasion that ‘this teaching is for advanced seekers only’! This implicit rebuke – if you don’t understand it, you need to go back and do some more sAdhana chatuShTaya sampatti – highlights what seems to be another problem.  It is an ego-booster, whichever way you take it. If you embrace it, your ego is now able to claim ‘I am the only jIva; everyone and everything else is dreamt up by me for my own enjoyment or suffering’. On the other hand, if you rebel against it, your ego is liable to be ‘boosted’ (in the opposite direction) by suffering the ignominy of having to admit ‘I cannot understand this; I am clearly not clever enough.’ (A third possibility is that I may claim I am sufficiently intelligent both to understand it and reject it!)

This why I call EJV the Devil’s Teaching. There is no ‘win or lose’; there is only ‘lose’ for Traditional Advaita and ‘win’ for the ego. Instead of respecting the existence of all other jIva-s at the empirical level and respecting the existence of the teaching which enables these jIva-s to gain Self-knowledge, both jIva-s and teaching are relegated to the trash can of pratibhAsa. And the ego is further boosted by the thought that ‘I myself am the author of all these wonderful Upanishads and Shankara bhAShya-s etc.’.

The ‘loser’ falls into all of the traps I outlined above:

19 thoughts on “The devil’s teaching part 2”