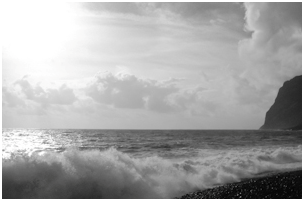 The ‘ocean-wave’ metaphor is a potentially powerful one but is often misunderstood. Here are a few quotes pulled off the Internet from a Google search:

“The waves emerge briefly as a separate entity; however, just as quickly merge back into the ocean of which it is a part. Us, as human beings, are very much like the waves of the ocean. We briefly surface and display a uniqueness that cannot be duplicated; however, in the end, we reunite with the Whole.”

“Actually our existence is just like an ocean. You are a wave of the ocean. You may be the most powerful, most thunderous, most beautiful and most inspiring wave of this ocean. But in the ultimate analysis you are just a wave. And the destiny of a wave is to merge again into the ocean. One day your little wave will also merge in the ocean of existence. Contemplate on this and understand the reality. We all are simple and ordinary in front of this huge cosmic play that is going on.”

“To explain this further, Babaji gave beautiful example of wave – the wave by itself has no identity, it has identity of wave only for a certain time.  When it rises it is known as wave, but once it merges back into the ocean the wave no longer remains the wave, it becomes the ocean.  We have the karmic illusion of different and separate identity.  When we go in, there is no difference, we are particles of that One.”

This interpretation of the metaphor ties in with the misconception, which is commonly held among seekers, that enlightenment has something to do with ‘merging’ with the Self. As I pointed out in Enlightenment: the Path Through the Jungle, “Enlightenment has nothing to do with ‘merging with the Self’ or ‘becoming one with God’. In reality, we are already the Self so that these expressions could have no meaning. Nor is it a ‘feeling of unity’. When the pot is broken, the ‘pot space’ does not merge with the ‘total space’; the ‘total space’ is entirely unaffected by the presence of the container and remains the same before, during and after the temporary appearance of the pot.”

It would also make nonsense of the mahAvAkya ‘aham brahmAsmi’ from the Brihadaranyaka Upanishad. If ‘I am brahman’, then to equate the ocean with ‘the Self’ and

the wave with ‘me’ would contradict this.

Nevertheless, I myself made this mistake in the first issue of Book of One, where I said:

“If a wave, on the sea were able to look around and think, it would see all of the other waves and might well conclude “Here am I, one insignificant little wave amongst all of these thousands of waves; doomed to a perilously short existence fraught with danger. Even if I should grow to a giant tidal wave, though my life might be dramatic and go down in history, it will be over all too quickly and my existence will be no more. And inevitably the wave will die but when it does so it finds that it is nothing less than a part of the vast ocean; that its imagined separate existence was only an illusion; that its apparent birth and death was just a play on the surface of the deep.”

In the second edition, I added the following to clarify:

“(Note, in respect of the two metaphors above, that they apply to the empirical view of existence – vyavahAra. At that level ‘I’ am a part of the totality – Ishvara. From the absolute perspective – paramArtha – I would have to say that I am not a part of the totality; there are no ‘parts’; I am the non-dual reality, brahman.)”

And this is the crux of the matter for (!) the point is that it only makes sense if you bring in

Ishvara. The jIva is the little, seemingly limited wave, destined to break on the shore and die; Ishvara is the mighty, all-knowing ocean, everlasting (for the time of this creation). So, in this (vyAvahArika) sense, the wave is a part of the ocean. But if it is only taken so far, the real power of the metaphor is lost and aham brahmAsmi is not realized. The fact is that both wave and ocean are both really water only and, similarly, both jIva and Ishvara are mithyA; in reality both are brahman alone.

So it is another interesting side-effect of this metaphor that it highlights the confusion of levels. The scriptures sometimes speak of the jIvAtman as a doer (and an enjoyer) and, of course the entire karmakANDa (the first part of the Vedas) is concerned with telling us what actions to perform. And yet passages such as Katha Upanishad I.ii.18-19 tell us that the Self ‘is neither born nor does it die’; ‘it does not kill, nor is it killed’ – it is eternal and unchangeable. Basically, it is not a doer.

The resolution is to recognize the level at which the discussion is taking place. In the empirical, relative, vyAvahArika world, we ‘live and move and have our being’. Enlightenment is not the result of any action but the mind has to be ‘prepared’ so that the knowledge provided by the scriptures can have its effect, just as the dirt on our spectacles has to be wiped off so that we may see clearly. From the standpoint of absolute realty – paramArtha – the Atman is the only existent thing, satyam. There is no action because the

Atman is vibhU – all-pervasive; there is nothing to do and nowhere to go.

So, to return to the metaphor, the wave is mithyA – its reality is water; it is only name and form of water, just as the ring and necklace are names and forms of gold. The ocean, too, is mithyA, not satyam – its reality also is water. So, in reality, both wave and ocean are one, because both are really water. Similarly, both jIva and Ishvara are mithyA: tat tvam asi. And note that this equality – ‘That thou art’ – is between jIva and Ishvara, not between jIva and brahman. The equality cannot be between jIva and brahman because the former is mithyA, while the latter is satyam – i.e. they belong to different orders of reality. The wave can say ‘I am the ocean’, only through knowing that both are name and form of water. The jIva can say ‘I am Ishvara’, only through knowing that both are name and form of brahman.

2 thoughts on “Wave and Ocean”