Dhanya developed an interest in Hinduism and Eastern philosophy in the early 1970s. In 1973, she traveled to India in search of a guru to guide her on the spiritual path. While there she encountered disciples of Neem Karoli Baba and his teachings of bhakti and karma yoga which influenced her life from then on. She studied Vipasana meditation for some time with S.N. Goenkaji beginning in 1974. In 1991 she met HWL Poonja, whose words sparked a desire in her to understand the teachings of nonduality. Subsequently she met other advaita teachers, including Jean Klein and Sri Ranjit Maharaj, who were great sources of inspiration to her. In 2002 she met her current teacher, Dr. Carol Whitfield, a traditional teacher of Advaita/Vedanta and a disciple of Swami Dayananda Saraswati. Having found a teaching and a teacher with whom she has a deep resonance and who clearly and effectively elucidate the means for self-knowledge, Dhanya now lives in Northern California, where she studies Vedanta and writes on the topic of nonduality.

Here is an essay I wrote on this topic some time back.

There seem to be a lot of churches on Maui. The missionaries did a very thorough job here. As I drive around I often see a cryptic message posted on a sign board outside a church. Little sayings that I suppose are meant to bring one back into the fold.

When I see these messages I often try and look at them from the understanding I now have about the nature of reality and the way the world functions as a whole.

Here is one saying that I pass quite often posted outside a Baptist Church. “Whose story are you living, God’s or yours?
END_OF_DOCUMENT_TOKEN_TO_BE_REPLACED

Of what nature is sraddha?  Trust in the words of the teacher and Vedanta is sraddha.

Quoting from Swami Dayananda’s commentary on the above verse from Tattvabodha:

Visvasa is trust, faith, in the words of Vedanta, vedanta-vakyesu.  What is that trust here?  That they are a pramana, a means of knowledge.  You give the status of pramana to the words of Vedanta.  You do not look at them as theory, speculation or philosophy, but take them as words that are an independent means of knowledge.  That is called visvasa.”

This type of faith is considered to be one of the qualifications for the gain of self-knowledge. There is a beautiful saying in the Bhagavad Gita that Swamiji quotes a lot ‘shraddhavan labhate jnanam.’  (Chapter 4, verse 39). END_OF_DOCUMENT_TOKEN_TO_BE_REPLACED 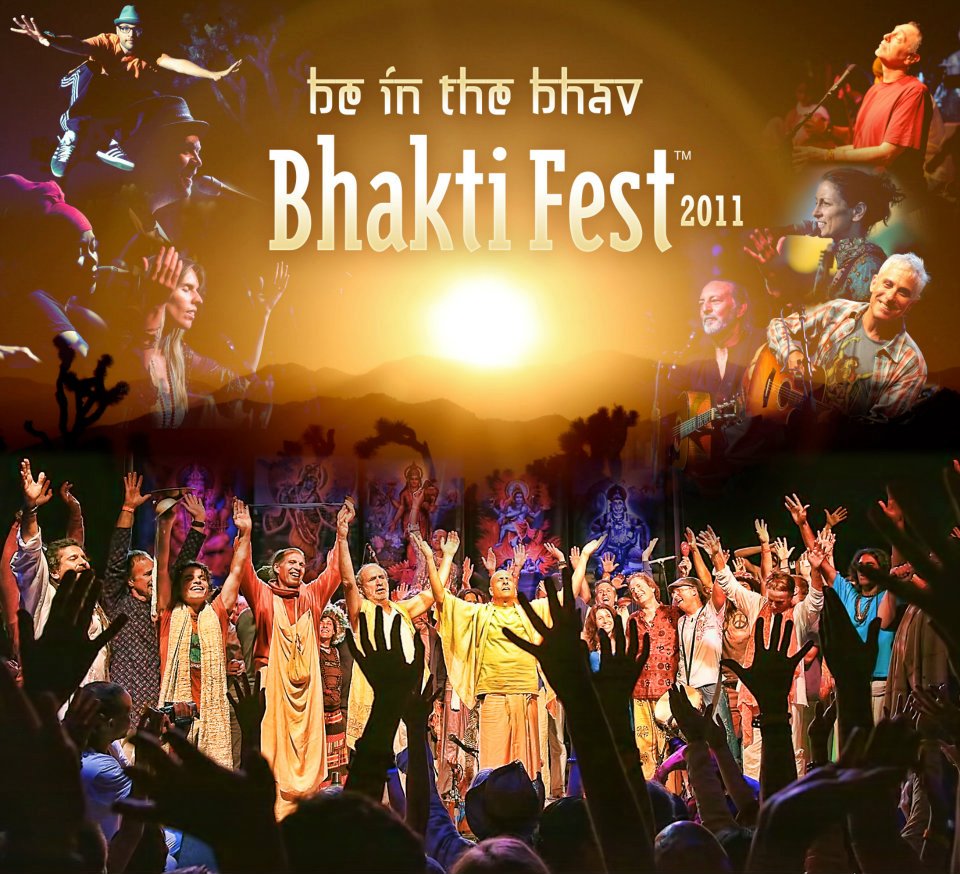 Who doesn’t like to get high? Let’s face it getting high is what we human beings live for. Getting high can also be called getting happy. Getting very, very, very happy. People pursue a high in all sorts of ways, from negative ways like drinking alhohol and taking drugs, to more positive ways like spiritual practices such as ecstatic chanting and dance.

When we do spiritual practices like ecstatic chanting and dance we feel we are entering another ‘zone,’ a place that is not available to us in ordinary life. We may feel we are progressing on the spiritual path. We may even assume that the goal of spiritual life is to always feel as high, or even higher, than when we do when we engage in ecstatic practices. END_OF_DOCUMENT_TOKEN_TO_BE_REPLACED 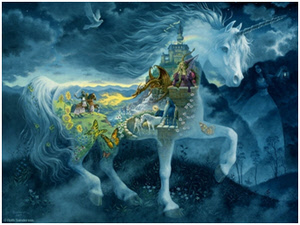 When you have a dream at night, the dream comes from you, is sustained by you, and resolves into you; and yet when you wake up in the morning, nothing has happened to you.

More than 30 years ago I spent a brief time in a spiritual scene which had all the hallmarks of a cult. The leader famously used to say, “If you doubt you’re out.” What that statement meant was that if you voiced a doubt about the many questionable things that were going on, you would be forced to leave.

‘If you doubt you’re out’ is a kind of interesting statement in my opinion; and from the point of view of trying to understand that nature of reality the statement itself might be interpreted in different ways. END_OF_DOCUMENT_TOKEN_TO_BE_REPLACED

The following was written in reply to a correspondent of mine who observed that people often act from ‘a basic egoic condition.’

Although some people may occasionally criticize others for acting from ‘the basic human egoic condition.’ I think it’s important to understand that the ego–at least according to the teachings of Vedanta–isn’t a bad thing to have.

The basic human egoic condition in Vedanta is known as ‘self-ignorance,’ or in Sanskrit ‘ajnanam.’

What is the definition of the ‘ego’ in Vedanta. First of all it is known in Sanskrit as the ‘ahankara,’ the aham ‘I,’ kara ‘maker.’ The ego, or ahankara, is considered to be a type of thought, which is the hallmark of self-ignorance. END_OF_DOCUMENT_TOKEN_TO_BE_REPLACED

Today on the beach on Maui my friends and I met a man who had a debilitating stroke that had changed his life completely. He was only 49 years old. His wish was to swim in the ocean, but he and his wife had felt unable to bring that off, and so they had stayed on the shore merely looking at the water. My friends helped this man into the water thus fulfilling his wish.

Later he spoke to us about the stroke that had totally changed his life. He was sad. He was depressed. He said that he no longer liked himself. His story was very touching. 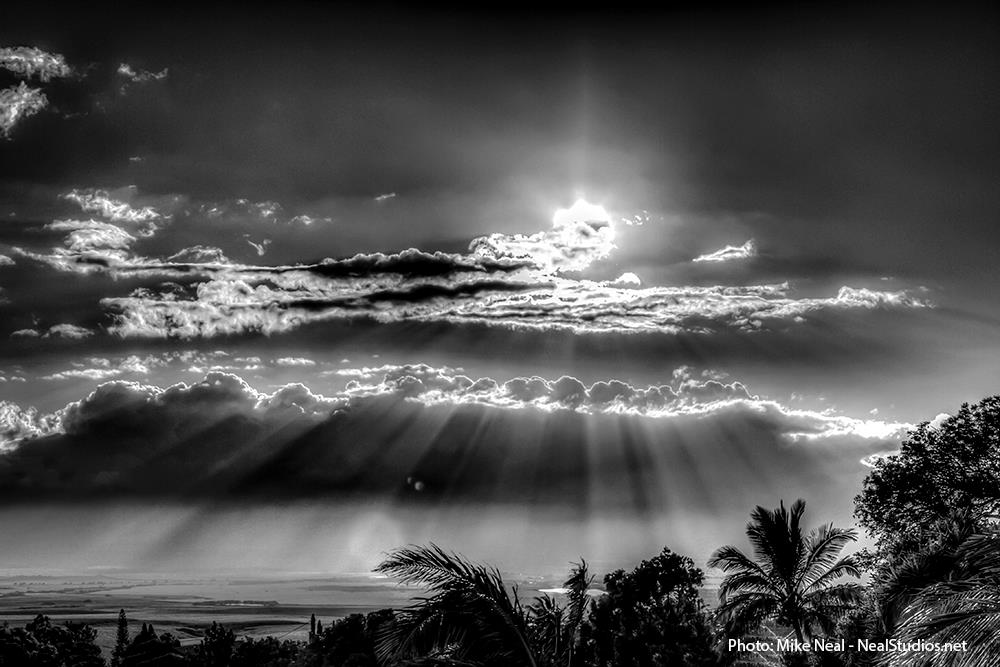 The teachings of nonduality are very popular in the West these days. One of the reasons I feel many people are attracted to these teachings is because they assume the teachings circumvent or do away with the idea of ‘God.’ I mean if there is only one thing here, one thing that truly exists, that does way with the troublesome God concept, right?

The word God itself is used and defined so variously these days as perhaps to be rendered useless anyway. However, when one examines the dual world of experience, there is one thing that cannot be denied. It seems to be put together and functioning in an intelligent manner. END_OF_DOCUMENT_TOKEN_TO_BE_REPLACED 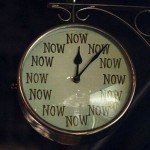 here is a picture that is making the rounds on Facebook of an old fashioned clock, and each number on the clock face is replaced by the word ‘Now.’

Although this is a fun picture to share, I wonder if in some ways it doesn’t give the wrong impression.