The immutable consciousness that the witness-self is, being reflected in the mind, and apparently limited by it, appears as the ego, the empirical self, which functions as the percipient.

The ego cannot be subjugated by one that takes it to be real. It is just like one’s own shadow. Imagine a man who does not know the truth of his shadow. He sees it following him persistently, and wants to get rid of it. He tries to run away from it, but it still follows him. He digs a deep pit and tries to bury it, filling up the pit; but the shadow comes to the top and again follows him. He can get rid of it only by looking away from it, at himself, the original of the shadow. Then the shadow will not worry him. The seekers of Deliverance are like the man in this parable. They fail to see that the ego is but a shadow of the Self. What they have to do is to turn away from it, towards the Self, of which it is the shadow.

Once the ego sees that it only seeks what it already knows, that its desires are conditioned and that its true desire is for permanent security and tranquility, it loses its dynamism to find itself in phenomenal things. Then what is behind the desire, the ego, the mind, is revealed. We are left in wonder and all dispersed activity dissolves in this wonderment.

The ulterior agenda of the human ego is always one of control and the validation of separation and isolation. “I am alone, we (organization, community, race, etc.) are alone, and I or we will prove it to you.” The ego is not ‘bad’ for trying constantly to validate that it is alone and separate. That’s its job. It is a guardian that is meant to take care of the physical body by providing boundaries. That’s how it evolved long ago.

However much you may try to kill the ego, it will only become stronger. So you have to approach it from the other end. Everybody understands in spite of the ego. The truth is that the ego automatically dies when you understand anything.

You will never succeed in bringing in light, if you insist upon removing all the darkness from your room before you do so. Therefore simply ignore the ego and try to understand, and the understanding itself will remove the ego. (Note 847)

When it comes to identity, we try to find something that we are, somewhere we can plant our flag and say: “This is me. ” The verb ‘to be’ implies a stationary, fixed quality. For instance, “I am a radio show host” has a very different quality from “I host a radio show.” The words ‘I am’ imply that whatever follows is a fixed quality of being, not something that comes and goes. 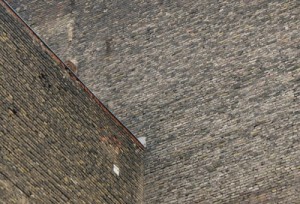 He whom I enclose with my name

is weeping in this dungeon.

I am ever busy building this wall all around;

I lose sight of my true being in its dark shadow.

I take pride in this great wall,

and I plaster it with dust and sand –

lest a least hole should be left in this name;

and for all the care I take

I lose sight of my true being.

The topic for the month of December 2013 will be ‘ahaMkAra‘, being the next subject in alphabetic sequence, which offers scope for lots of quotations. Since this is better known as Ego in the west, quotations on this subject are also naturally included. Consequently, we may find the topic extends to two months!

Uff, It’s a terrible pounding head-ache. Felt like a herd of hundred elephants at once trampling on my head. Cups of freshly brewed coffee, and green, white, oval, or round caplets and tablets proved themselves totally inefficacious.

It’s been bright and sunny outside; my write up went off smooth and fast; I got even that rare pat from Dennis. Enjoyed a delightful gastronomic luncheon.  Overall, it had been a very pleasant day. I couldn’t find a reason for the exploding headache.  I was helpless by late evening and had to visit my Doctor. He let me in, though far out off his Consultation hours.

The Doctor lifted his head out of the piles of Advaita books around him, the light from the table lamp throwing an eerie arc of illumination on his face. The soft light from the computer screen added a strange greenish glow-effect to his broad smiling face welcoming me into his otherwise dimly lit drawing room. I felt that I was seeing the grin of a live Cheshire Cat rather than a welcome from my Doctor friend.

The Doc heard my story of agony and suitably tutt-tutted.

And suddenly his Advaitic genius sprang out. He declared, Oracle-like,  that there should be a ‘head’ to have a headache. And he convincingly argued that I had no head. Yes, Did I ever see it? No, never. Even if my hands touched it, could the hands know what they touched? No, never.  It was I who imagined what it was that was touched by the hands and gave a name to the resulting sensation as ‘head.’  Meekly succumbing to his invincible logic, I lifted my head a little when I saw myself in the window glass on the opposite side. I shouted in joy to prove to him that I had, after all, a head that was begging for a cure. But no, he didn’t relent.

“Mirrors can lie,” he said, “Don’t believe the reflection. A glass can show things even if the things are not there.” To prove his point, he quickly linked on his computer to the 1 min Video clip of his fellow Psychologist here. Yes, the mirror showed a banana, even when there was none!

In utter bewilderment, I asked submissively, “Who is this that thinks I am and what is this pain?”  The Doctor declared triumphantly, “It’s only ‘Pain’ that is there. No separate ‘you’ anywhere.”

“You see, you are appearing as the ‘Pain’ at this moment.”

Q: I have a problem with the boredom of everyday life. Nothing seems to satisfy me. I just find it so difficult to be just here in the moment and be content with that. You say: go through life and work etc, but as a witness to it all.

Am I living in moment as I should? Should I give all my attention to each action, so that the ego is absent or should I just be the witness of everything every action on a moment to moment basis?

Maybe if I understand how to live in the moment better and had some clarification, that would help me stay present and focused on just living. My mind lives in the future.

(Note: I have reworded the question slightly but some of the replies quote from the original question. Apologies for any confusion!)