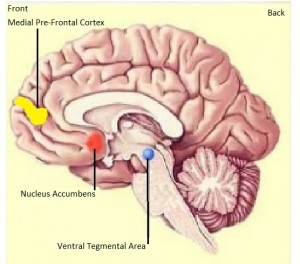 In an initial fMRI experiment, researchers compared neural activation during self-disclosure to activation during other-focused communication. Three neural regions stood out. (See the figure at top left showing the brain  cut vertically in the middle – the forehead is to the left and the back of the head to the right in the picture).  END_OF_DOCUMENT_TOKEN_TO_BE_REPLACED