This is a term, which I had not encountered before, coined by Fort in Ref. 200. He uses it to refer to those teachers and texts that incorporate elements of sAMkhya and yoga philosophy into their supposedly Advaitic teaching. This applies to texts such as yogavAsiShTha and jIvanmukti viveka, as was already indicated in the discussion on vidyAraNya above. There are also 20 of the later, minor Upanishads that relate to Yoga (see https://en.wikipedia.org/wiki/Yoga_Upanishads) and there is a danger of referring to these to support ideas that are actually alien to traditional Advaita. These ideas are characterized by the notion that Self-knowledge gained through the usual route has to be supplemented by something else before liberation is achieved. Typically, this might be samAdhi or destruction of ego/mind, as discussed above (and below) but even ideas from other traditions might be incorporated. The yogavAsiShTha also has much emphasis on the ‘illusory’ nature of the world. The j~nAnI acts or does not act without any attachment, according to circumstances.

Rather than prArabdha, yogic Advaita tends to refer to vAsanA-s as being the key ‘obstruction’ to mokSha. While we have them, we are bound to the body; once they are purified, we are freed from saMsAra. When destroyed, we gain videha mukti. END_OF_DOCUMENT_TOKEN_TO_BE_REPLACED 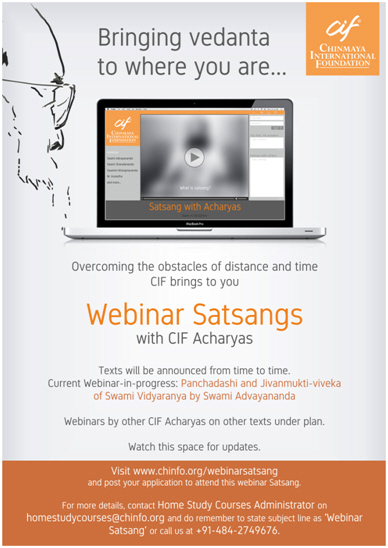 I have just received notification of the webinars which are being run by Chinmaya International Foundation. These are conducted on-line with audio and video content, covering both introductory and advanced texts – an opportunity to study with a traditional teacher when you do not have physical access to one! They are for serious students and feature Q & A sessions (in both directions!). Sounds excellent!

For more details about the courses and how to apply, look at their website.

If any visitor to this site takes up the offer, I would be interested in hearing back from them as to how they get on.