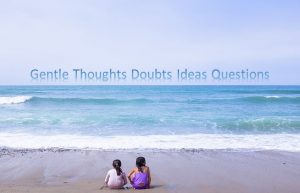 Suppose, I sit and imagine with and within my mind that I and you are both sitting at a Caribbean beach (of course wearing masks and observing safe distance) watching the boats and the men and their activities. What can we say about the stuff with which all those objects in my imagination are made up of? Is there any substance at all in them?

Suppose I see in a mirror me and the entire room where I am. What can we say about the stuff with which all those objects in the reflection are made up of? Is there any substance at all in them?

Suppose a bunch of exquisite and unseasonal flowers and an imposing elephant are conjured up by a magician (Illusionist). They are indistinguishable from real flowers to the eye and the animal’s behavior is very natural, What can we say about the stuff with which all those objects in the magic are made up of? Is there any substance at all in them? END_OF_DOCUMENT_TOKEN_TO_BE_REPLACED

Q: Although understanding that there is only one  true Self, can we not imagine multiple parallel consciousness-es of multiple Self’s? Are there any categorical arguments against such a thing existing? If Brahman came ‘of itself’ (anAdi, beginningless) ,  could there not equally be many anAdi Brahmans? I know that this doesn’t help in calming our brains at all, but it does challenge the non dual core concept, doesn’t it?

A (Dennis): There is only Consciousness, which is non-dual. There are not subject(s) and object(s). You can imagine whatever you like but imagination is not reality. Multiverse(s) is/are the realm of cosmologists trying to make sense of perceived things. But perceived things are mithyA. Even the perceiver is mithyA. It would not matter if there were multiple universes, they would all still be mithyA.

In kArikA-s 2.20 – 28, Gaudapada derides some 36 different, then current, theories of the nature of reality and concludes: “All these ideas are nothing but imaginations in Atman. In Consciousness, there is neither creation, nor sustenance, nor destruction – all are mAyA.”

[The latter part of the article requires a bit of mathematical (or at least arithmetic) orientation in the reader. If you know the addition, 1 + 1, that is enough. Otherwise, it could prove slightly boring!]

We shall tackle now the question of how we wake up to be what (we think) we were before we went to bed.

I said in my previous argument that our waking up to a new morning and into an awake state is comparable to another cycle of creation.  So I suggest we examine how creation itself takes place.

From a scientific perspective, creation seems to be happening from ‘nothingness’ and dissolving back into nothing.  Vedantins prefer to call nothingness as ‘Beingness’ simply because even ‘nothingness’ has to ‘Be.’

If we go by what Quantum Physics tells us, what we may refer to as ‘nothingness’ is not just emptiness.  There is an enormous amount of energy in ‘Emptiness.’ Physicists have been able to measure this energy of empty space.

The energy within the empty space of the nucleus of an atom is the main reason for the weight of the nucleus (and hence of the matter we are all).  The energy of the emptiness within the intergalactic space is the reason for the expanding universe causing the colossal and mighty galaxies to recede from one another at speeds exceeding the speed of light. This vast energy is the result of constant creation and annihilation of virtual particles smaller than sub-atomic particles. Thus creation-dissolution is an ongoing unstoppable roiling and boiling process from emptiness to emptiness within emptiness!