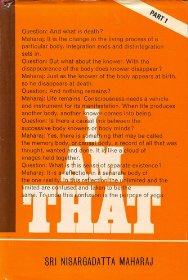 Prior to your waking is Nirguna, the substratum of Waking. The Nirguna is not at all bothered by this samara (samara = ‘war (of life)’). In Nirguna appeared knowledge (Bodha).  This is pure Consciousness or Beingness or the Sense “I am” that has no shape or form. In this pure Consciousness there appeared a slight perturbation or movement and the pure Consciousness then grabbed a body-form (deharupa). After wearing this body form it started calling itself a man or woman while bound by different concepts (I am this; I am that; I am going; I am coming etc.). These concepts are all imaginary (Kalpana) and not real. END_OF_DOCUMENT_TOKEN_TO_BE_REPLACED

Part 11 of the commentary by Dr. VIshnu Bapat on Shankara’s Tattvabodha.This is a key work which introduces all of the key concepts of Advaita in a systematic manner.

Part 11 looks at the five organs of action and the nature of the causal body.