Q: Who is the doer and enjoyer of action if not brahman and ego?

A (Dennis): In reality (pAramArthika viewpoint), there is no doer, enjoyer, ego or action. From the point of view of the person in the world (vyAvahArika viewpoint), you can use whatever ‘explanation’ you feel happy with! The usually accepted way of explaining it is that brahman enables the action to take place through the jIva (Consciousness is ‘reflected’ in the mind). 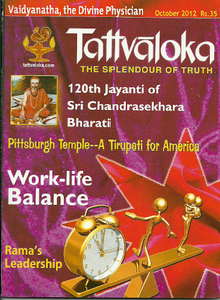 Part 11 of the serialization of the  presentation (compiled by R. B. Athreya from the lectures given by Swami Paramarthananda) of upadesha sAhasrI. This is the prakaraNa grantha which is agreed by most experts to have been written by Shankara himself and is an elaborate unfoldment of the essence of Advaita.

Subscribers to Advaita Vision are also offered special rates on the journal and on books published by Tattvaloka. See the full introduction and part 1 of the new series.

Q: I have seen from articles and questions on your website that Brahman cannot ‘know’ or ‘do’ anything; that it (as if) acts and knows only through the body-mind of the jIva. What I would like to know is: why would anyone want to become enlightened if this means the end of rebirth, and ‘becoming’ one with Brahman? OK, this may mean the end of suffering but does it not also mean the end of enjoyment? If ‘I’ (even though this is only a reflection in the mind) cease to exist (when the body-mind finally ceases to exist) on the death of the enlightened person, then there is no more experiencing of any kind for me as that person, and none for the Brahman that I (as it were) become.

You will perhaps say that, as Brahman, I will still experience through all the other body-minds but this does not sound like enlightenment to me! And don’t I do that already anyway since there is only Brahman? In which case what is the meaning (and point) of enlightenment? END_OF_DOCUMENT_TOKEN_TO_BE_REPLACED

Q: It seems like a contradiction to me to say that we are the observer and not the doer and, at the same time, suggest that we can do something such as paying attention. I encounter this “apparent contradiction” often when I read about Advaita. If there is no doer, why are there suggestions as to how to remove ignorance, for example? Who would remove the ignorance if there is no doer?

– Is it that in the dualistic world it appears as if there is a doer and therefore we act “as if”, even though we might know that there is no doer?

– If we realize that there is no doer but we act “as if”, is it like playing our part in a “game”?

– If the ignorance is removed, “who” apperceives the truth? END_OF_DOCUMENT_TOKEN_TO_BE_REPLACED