Is every action predetermined or is there free will?

The notion of ‘free will’ is of Jewish-Christian origin, and is the other side of the coin which refers to that other nostrum – ‘(the problem of) evil’, which complicates things even more. God, being the summum bonum, is not responsible for evil; therefore that responsibility falls entirely on (fallen) man.

There is no notion in Plato (and generally among the ancient Greeks) of the concept of ‘free will’, in the sense of a faculty of the soul which determines a particular course of action – choice, in other words. Rather, it is an inclination or appetite (desire) which motivates action and is either for the highest and noblest aspiration in man, or for his lower preferences (they correspond to Being and Becoming respectively). When the inclination is towards the Good, Plato calls it Eros. This account of ‘good will’ was preserved in St. Augustine (dilectio or caritas).

A similar view can be found in Br.Upanishad 4.4.5: “Man is fashioned by desire; according to his desire is his discernment; according to his discernment he does his work.” Also: “For just as men here below pursue the aim after which each aspires, as it were done at command, whether it be a kingdom, or an estate, and live only for that, (so in their aspiration for heavenly rewards they are the slaves of their desires” – Chand.Upanishad 8.1.5). Paul Deussen, in ‘The Philosophy of the Upanishads’, from which I just quoted, concludes: “The standpoint of the Upanishads, therefore, is a rigid determinism”.

That judgment, however, should be applied only to the empirical viewpoint of the everyday world, not to the higher one, where Atma (-Brahman), the only reality, reigns with absolute freedom, if one can say that. ‘That Thou art’.

Q: Recently, a relation suffered cardiac failure and was declared as  ‘dead’ by one of the doctors in the local hospital. 30 minutes later, a doctor at a bigger hospital used a defibrillator to restart his heart. Unfortunately, for this span of 30 minutes, his brain was not receiving oxygen and conseqently 50 % of it was damaged leaving him in a ‘Persistent Vegetative State’. He has been in this condition for the past 2 years.

Currently I am studying various Upanishads along with Advaita Vedanta philosophy and I would seek your help on the following questions:

1) According to Advaita Vedanta and Upanishads, the soul departs on the death of a person. So in my relative’s case, does that mean that the ‘Soul’ had departed and came back again or did it never depart from his body ?

2) Does Vedanta recognize a person in a ‘persistent vegetative state’ as ‘alive’ ? How would Vedanata describe this state in terms of the usual 4 states (awake, dream, dreamless sleep and turIya)?

A (Dennis): Sorry to hear about your relative’s situation. It is understandably distressing.

Advaita is a progressive teaching. I.e. the scriptures or a teacher will provide one explanation for a new seeker and a different one for an advanced student. Ultimately, as you must realize, there are ‘not two things’. Therefore, the final understanding must be that there are no persons, no world, no mind etc; there is only brahman and ‘you’ are That.

The most useful way of answering your question depends upon an understanding of the concept of chidAbhAsa, the ‘reflection’ of Consciousness in the mind. I wrote an article about this which you can read at https://www.advaita-vision.org/chidabhasa/. There is also a follow-up blog, which does not seem to be available any longer. I will post both of these at AV in March (when the copyright expires). There is also an extended discussion on the subject between myself and Peter Bonnici at https://www.advaita-vision.org/discussion-on-chidabhasa/. END_OF_DOCUMENT_TOKEN_TO_BE_REPLACED

Q: On the subject of karma please could you explain who or what decides on the destination of the “stamp/soul/” to a higher or lower life form. It would seem to be a judgmental decision based on our behaviour so presumably cannot be “Self” which is unaffected and affects nothing?

Explanations at the level of vyavahAra are interim explanations for the benefit of someone who does not yet appreciate the above. At this level, there seems to be cause and effect and all the apparent scientific laws that operate in the world. Ishvara is the name given to the ‘entity’ of ‘brahman + mAyA’ who lays down these laws. But the laws are not operated by Him on an individual basis; they are simply the ‘rules’ that are necessarily followed by everything in creation (such as gravity, Newton’s Laws etc). There is no ‘judgement’ involved at all.

EXPLANATION
.
It was made clear at the beginning of this essay that what we mean by the “ego” (the “personality”), it being no more than a delusion, a false image or projection, cannot be a subject, except in a dream -and is itself a “dream”. We described the fight of the “ego” in its efforts at reaffirmation as an “unholy war”. That it is obviously the soul, the person, who is the subject of the delusion, the “dream” ; his/her’s the “holy war”, the suffering and the required effort towards reawakening (is not life itself a dream? –it is so for “fallen man”). The soul’s, the person’s destiny – and this is conditional according to the monotheistic religions – is to finally be “reabsorbed”, united or reintegrated , and thus liberated. Liberated not from itself (its Self!) by itself , not even from life, but from a false image of itself and of life (“the world”) due to ignorance (avidya).

It is thus through ignorance, passion and attachment, that individual man (non-gender term) has “become” an “ego”, a “dreamer”, until, or unless, he wakes up. Existence itself is a ‘becoming’, not ‘being’, according to Plato and all traditional thinking. This subject is otherwise inexhaustible, and here we may remember the saying of Râbi’a quoted at the beginning, as well as the utterances of so many other sages and mystics. END_OF_DOCUMENT_TOKEN_TO_BE_REPLACED

2. And here we come to a necessary distinction: ego and ‘ego’, or self and ‘self’; the necessary, real or true ego, and the contingent ‘ego’, the ‘false ego’. Based on the previous considerations, it might seem that the latter is what is meant by the empirical, worldly ego, or ‘outer man’ of philosophical discourse (as in Frithjof Schuon), but that would be an error, since that ‘ego’ does nothing, being merely an impostor, or a mask, thus ultimately as unreal as the son of a sterile woman. What is real – though ambivalent, as will be shown just below in this same paragraph – is the soul (jiva in non-dualistic advaita philosophy), that is, the subject, one of his sides, as it were, facing the higher, spiritual domain and the other facing the outer world. This last, outer or ‘empirical man’, is the doer and the sufferer – this is the way he sees him/herself (cf. ‘Explanation’, p. 9, et passim).

Similar remarks can be made for now about individual and ‘individual’, the second term referring to a limited, narrow view, actually an ideology, that is, viewing the individual, and the individual viewing himself, as ‘self-sufficient’, ‘self-motivated’, independent and autonomous –in other words, the product or result of individualism (about which there would be much to say in psychological and sociological terms). The first (individual or jiva) is a metaphysical entity, rooted in being… but why ‘ambivalent’? The answer is that while the second, ‘individual’, stands for a psychological construct (as the ‘ego’, its equivalent term, is such, obviously), what can be said of it – namely, that this deluded ‘individual’, rootless, ‘for himself’ alone, happy may be at times, but mostly forlorn, and subject to all sorts of dis-ease if not despair(1)- is by and large the actual description of the ‘normal ego or individual’! And so a clarification is in place: END_OF_DOCUMENT_TOKEN_TO_BE_REPLACED

Q. I’ve been thinking about death for a long while and last night something came to me that I wanted to share with you. It’s not so much a question, though. Rather, I’m just wondering whether my thinking is ‘on the right lines’.

Ok, imagine a dead body lying in a coffin. Let’s say that this person lying there is called John Doe. Many people would believe that now John Doe is dead, something would have left the body, that this ‘John Doe’ identity is no longer there. My thinking from what I’ve learned about Vedanta so far, is that this ‘John Doe’ was probably never there as was perceived in the first place. END_OF_DOCUMENT_TOKEN_TO_BE_REPLACED 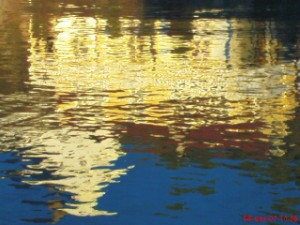 Today we bundle everything that is considered spiritual under the term New Age. There are even people, who consider psychotherapy as spiritual and again others who would call their traditional religious practices spiritual. Thus „spirituality“ is a broad field. Advaita Vedanta provides a very specific definition for spirituality that sets limits to this broad field. In Advaita Vedanta someone is considered spiritual only, if he/she wants to realize truth – the key to truth being realizing my true nature, who or what I am – as distinct from body and mind. Everything else may lead to spirituality, but will not provide the realization, that I long for.

All humans are seekers, all humans want to grow beyond themselves. Some want to multiply their possessions because they assume that thereby their limits extend. Others want to increase their quality of life because it helps them over the inevitable limits of human existence. Again others believe that such outer changes won’t be effective as long as one does not have a psyche that is able to enjoy possession as well as quality of life. These start to work at the psychological level to thereby grow beyond themselves. Others aim to extend their limits by exploring subtle phenomena and experimenting with them. END_OF_DOCUMENT_TOKEN_TO_BE_REPLACED